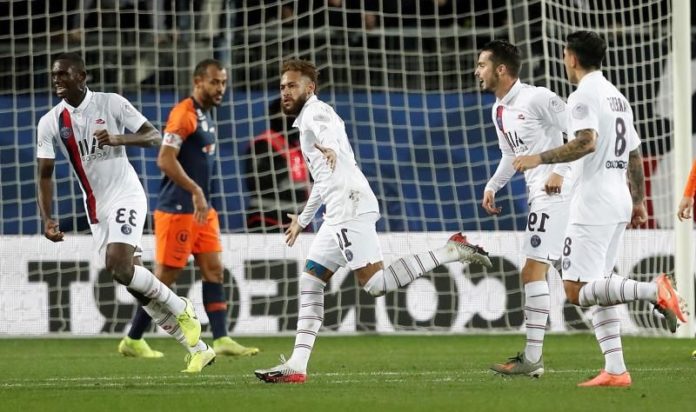 Neymar and Kylian Mbappe pulled Paris Saint Germain out of trouble in his visit to Montpellier, who dominated the score and the champion until he stayed with one player less for the expulsion of the Portuguese Pedro Mendes twenty minutes from the end and paid him with the defeat (1-3).

The set of Thomas Tuchel did not have an easy transit through the Stade de la Mosson before an opponent now located in the equator of the classification but whose objective is its inclusion in the European zone.

The German coach had to deal with a couple of setbacks. The injuries of Presnel Kimpembe and Idrissa Gueye, which led to two precipitous substitutions. For the first one Abdou Diallo came out and for Gueye Nianzou Kouassi. The half hour had not been reached.

On the edge of the break, Montpellier was ahead on the scoreboard. It was after a corner kick taken from the right by Keylor Navas. He headed Daniel Congre and diverted the Argentine Leandro Paredes to surprise the Costa Rican goal and introduce the ball into his own goal.

Paris Saint Germain dominated the meeting. He locked his rival, who defended himself solidly and in which the performance of the Argentine goal Gerónimo Rulli stood out, which disrupted any visitor action. The Real Sociedad exporter prevented the goal of the Tuchel team several times.

But Montpellier’s options were diluted from the 73rd minute when he stayed with one player less for the expulsion of Pedro Mendes.

The situation was relieved for the whole of Tuchel, who balanced the match two minutes later.

Neymar beat Rulli with a candid blow that slipped through a squad and established the draw that spurred the Parisians and frustrated the locals.

In the absence of a quarter of an hour, Paris Saint Germain was ahead. Neymar handed the ball to Mbappe, at a corner of the area. The Frenchman drew his marker and crossed the ball out of reach of the local goal.

Mauro Icardi put the sentence when splicing from the penalty spot a center from Mbappe’s left.

The victory enlarges to eight points the advantage of Paris Saint Germain, which has pending the match against Monaco of the fifteenth day, with respect to Marseille, which on Sunday receives the Girondins.

Precisely, Monaco also managed to add three points after beating Amiens 3-0 thanks to ten electric minutes of the second half in which it made a difference between both teams.

Leonardo Jardim’s men resolved the clash between 60 and 69 minutes, in which they celebrated three goals of Wissam Ben Yedder, Chilean Guillermo Maripán and Senegalese Keita Baldé. That stretch was enough to leave the Monegasque box at just three points from the European positions in the center of the table.

The Rennes also took impulse, which settled in the fourth position after achieving a worked victory in its stadium against the Angers (2-1). A double from Senegalese M’Baye Niang led Julien Stephan’s team to the privileged positions of the table and, with one game less, is only one point away from Lille, third in the standings.

Meanwhile, Nice thrashed the Metz 4-1 and settled in the inconsequential zone of Ligue 1 to leave their opponent one more day in the relegation places. A pair of goals from Wylan Cyprien, the first of beautiful invoice thanks to a good shot from outside the area, and the goals of Ignatius Ganago and Pierre Lees Melou, sealed the local victory.

Finally, Toulouse will be another week the colista of the League of France. He could not with Strasbourg, which achieved a strong 4-2 with which he moved away from the relegation places. Although he was ahead on the scoreboard with a shot by Nicolas Isimat-Mirin at the exit of a corner, in the end he fell bluntly.

Lenglet: “I’m not attracted to buy a Ferrari”

Gerard Pique, the captain of Barça again ridicules the club