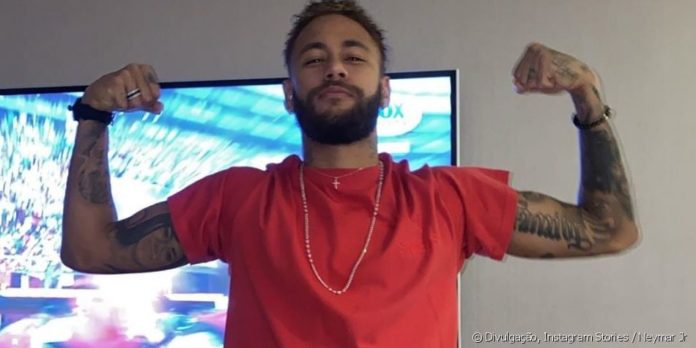 Neymar cheered for Flamengo in the Libertadores final and shared the moments of joy with the goals of his brother-in-law, Gabriel Barbosa, Gabigol. After the match, the star honored Rafaella Santos’ boyfriend by doing the traditional striker pose. ‘Today had two goals from Gabigol,’ he wrote. Recently, Neymar hinted at a discomfort after covering his brother-in-law’s face in a frame by posting a photo on Instagram.

Neymar celebrated Flamengo’s victory in Libertadores and honored his brother-in-law, Gabigol, who scored both goals in the championship final on Saturday (23). The PSG player shared two videos on his Instagram Stories cheering for the Brazilian club – which beat River Plate 2-1, a result celebrated by Marina Ruy Barbosa and Bruno Gagliasso. After the match, Neymar posted a photo doing the traditional pose of her sister’s boyfriend, Rafaella Santos. “Today had two goals from Gabigol,” he wrote in the publication. He recently left followers confused about a possible discomfort with his brother-in-law after the Flamengo striker’s face appeared covered in a photo posted on Instagram.

NEYMAR CELEBRATES MADE OF GABIGOL AND POLISH RELEASE
After the publication, which puzzled followers, Neymar – who has a romance with model Natalia Barulich – dismissed rumors of quarrel with his brother-in-law to congratulate him for reaching an important mark in Flamengo. This month Gabriel equaled Zico with a total of 21 goals for the team in an edition of the Brazilian Championship. “What can I say? Just reverence you, our eternal idol!” Wrote the red-black in an Instagram post. In the comments, Neymar posted clapping emojis celebrating the attacker’s conquest.

RAFAELLA SANTOS PRAISE THE BOYFRIEND IN POST: ‘MY MAN’
David Brazil posted a photo next to Gabigol and wrote: “Two from Gabigol. Respect the guy.” In the comments, Rafaella Santos praised her boyfriend. “I respect my man, dear,” replied the star’s girlfriend who raised suspicion of pregnancy in the followers. Before the match, she shared a photo kissing the player and declared: “I’m here cheering for you. I love you”.

This week, Carol Dantas left the euphoric netizens by giving a possible indication of Rafaella Santos’s pregnancy. “Baby slept and I: …”, wrote the model, while displaying images with faces and smiles. A netizen commented: “Rafa will be like this (laughs)”. Carol then confirmed the follower’s assumption: “Really (laughs).” However, the mother of Neymar’s son denied that she was talking about her former sister-in-law. “Guys, my cousin’s name is Rafaella and she’s pregnant! She is not my son’s aunt [David Lucca]. Enough of mimimi,” he asked to influence the social network.