Home Tech Next Generation Thunderbolt Will Get 120 Gbps, As Can USB 4 2.0. 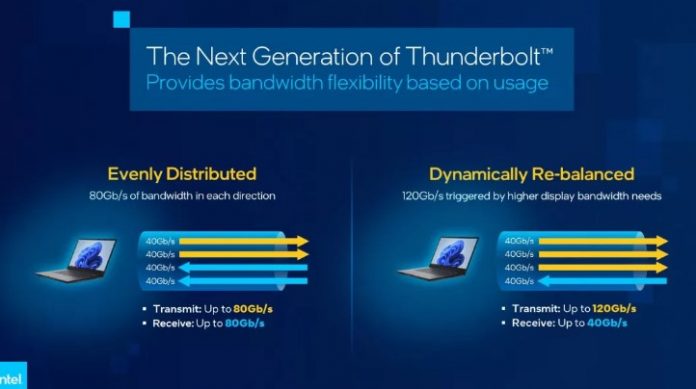 Recently published USB4 2.0 specification, the next generation Thunderbolt promises similar capabilities. Thunderbolt and USB4 have been in close contact for a while in terms of bandwidth due to their close connection.

On Wednesday, Intel shed more light on the successor to Thunderbolt 4. Like USB4 2.0, the new standard offers a connection bandwidth of up to 80 Gbit/s, and in some cases can reach 120 Gbit/s.

The next—generation Thunderbolt — Intel hasn’t named it properly yet, so Thunderbolt 5 isn’t a given – supports bidirectional bandwidth of up to 80 Gbps, which Intel first demonstrated in Israel last month. However, this week the company also introduced the ability of the new Thunderbolt to transmit data at a speed of 120 Gbit/s, and receive data at a speed of 40 Gbit/s.

The USB promoter group, which includes companies such as Apple, HP, Intel, Microsoft, Renesas Electronics, STMicroelectronics and Texas Instruments, briefly mentioned the same possibility for USB4 2.0 when it published its specifications earlier this week. The asymmetric connection can be convenient for high-performance USB4-based displays and other video-intensive workloads. Intel highlights the usefulness of Thunderbolt for gamers and content creators who need to move large files.

According to Intel diagrams, one of the differences between USB4 and next-generation Thunderbolt is that the latter requires a bidirectional connection at 80 Gbps and an asymmetric connection at 120 Gbps. On the contrary, the diagram shows that the USB4 specification only optionally supports bandwidth above 20 Gbit/s, but does not distinguish between USB4 1.0 or 2.0.

The two technologies seem similar since USB4 1.0 is based on Thunderbolt 3. Both support 40 Gbit/s connections, and their successors upgrade to 80 Gbit/s and 120 Gbit/s almost simultaneously (Thunderbolt 4 retained the same bandwidth as TB 3, but added more display and security capabilities).

Like USB4 2.0, the next generation Thunderbolt is compatible with previous versions of USB and Thunderbolt. Thanks to the new alarm technology, it supports existing passive cables with a length of less than 1 meter.

Intel plans to reveal the official name of the next-generation Thunderbolt, as well as its other features next year. The company could call it Thunderbolt 5 or designate it as a division of Thunderbolt 4, similar to the name USB4 2.0. However, some believe that the branding of USB4 is confusing.

Huion vs. Wacom: which tablet to buy?