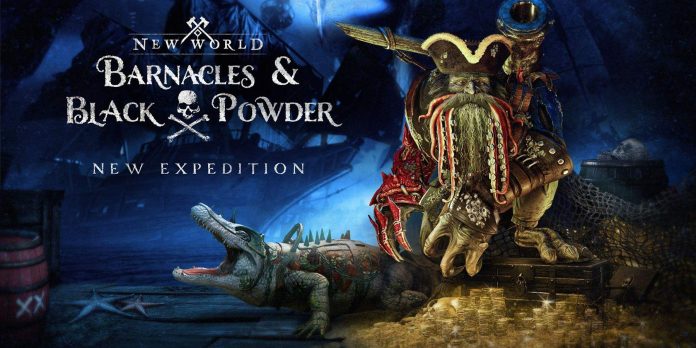 There was a time when it seemed that Amazon’s New World Game should become the popular MMO of 2021. However, despite the relatively successful launch, a combination of bugs and other problems led to a sharp decline in the number of players in the following months.

However, New World is not dead yet, and developers continue to support it with regular content updates. The latest update, version 1.6.2 of the game, was released on August 9 and introduced a new expedition, a lot of bug fixes and user interface adjustments.

The newest expedition of New Worlds is called Barnacles and Black Powder. The player will have to fight with the mutated Admiral Blackpowder, very similar to Davey Jones from Pirates of the Caribbean, and his team of spoiled thugs. The new expedition features three new mutations, several new items and bosses, and the recommended level is 66. The developers of New World originally planned to release Barnacles and Black Powder earlier this month as a continuation of the Summer Medleyfaire event. However, it was postponed due to an undisclosed problem and launched on August 9. New World players can start the expedition with the Saber Keys.

In this regard, the New World 1.6.2 update also fixes several errors related to expeditions. These include solving the problem that caused the game to take into account the PvP arenas of the New World and other modes in accordance with the limit of players in expeditions. The developers also fixed a bug that caused combat music to be played in the open world instead of expedition music.

The patch also contains a set of general fixes, including fixing various errors and server crashes. Amazon developers also fixed an issue that prevented players from switching between servers using the New World’s World Transfer system. They also introduced a 72-hour recovery period between global and regional transfers. Other common fixes include solving an issue that made deleted objects appear frozen, and another that caused hidden caches to appear despite being on hiatus during the New World Summer event.

The remaining corrections and adjustments relate to the user interface and social systems of New World. Firstly, the developers fixed a visual problem with the description text in the trading post. They also refined the visual effects in the song selection interface for musical performances added in the July update of New World. Amazon Games additionally fixed the problem that caused the Divine Vengeance weapon skin to be displayed incorrectly in the in-game store. Finally, the developer has changed the confirmation message that appears when players re-associate the keys with the space bar.

Fans can check out the full patch notes on the game’s website. Overall, the latest New World update is not as significant as the July Summer Medleyfaire update or even the less significant 1.6.1 update that followed it. However, we hope that New World players will be happy with the new content and improvements in the quality of life.

The new world is available on PC.

A Minecraft fan showed a charming family portrait created in the...