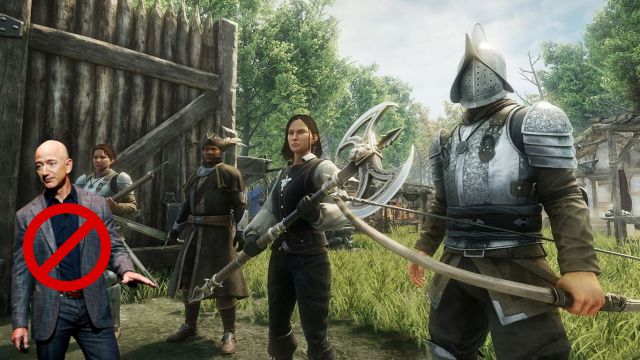 New World: The MMORPG prevents players from becoming the billionaire even in this fantasy world. If you have idea of ​​emulating Jeff Bezos in New World, even if it is by sharing his name, maybe you should know that you can not do it. The new from Amazon Game Studios, which went on sale on September 28 on PC with certain problems on its servers, prevents players from selecting the name of the founder and CEO of Amazon. PC Gamer has verified that the name of the tycoon and its variants are completely blocked.

According to this media outlet, neither ‘Jeff Bezos’, nor ‘Bezos’ nor any variant such as ‘JeffB’, ‘Bez0s’ or ‘Be Zos’ are allowed. To no one’s surprise, it is also not possible to use ‘Amazon’ as a nickname or any that includes these terms. And what about more subtle puns, like, for example, ‘Beff Jezos’? The truth is that it was not blocked, as PC Gamer itself verified, but another user had had that brilliant idea and it was already taken.

The decision to block these names has not been made official, but it is obvious that Amazon does not want them to be used in a parodic or harmful way, so it is better to cut your losses and avoid what would have been inevitable if it had been allowed. Now we wonder if it is possible to use the name of Bill Gates or any other personality in the business world.

New World is an MMORPG developed by Amazon Game Studios. The internal studies of this conglomerate have had multiple problems to launch their products. Some of them, like Crucible, stayed on the road.

With this new title they intend to achieve the success that so far has resisted them, although its premiere has not been without problems. In addition to the previous delays, their arrival has seen long lines due to server congestion, a fairly common problem during the early days of online gaming.

Elden Ring: Its Director Highlights The Challenges They Have Overcome During...