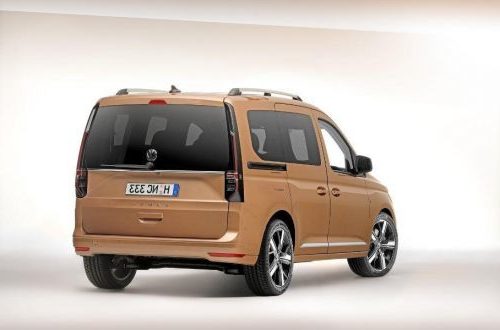 Images of Caddy, the new vehicle of the German automotive giant Volkswagen, were published in the German media before its official introduction. While all the design details of the car are not revealed, the innovations on the front and rear draw attention.

The new footage of Volkswagen Caddy, which has been rumored for a while and we only see its photos, has been published by the German media. While all the design details are not included in the images published before the official introduction, the design innovations on the front and rear parts are noticeable.

The photos exhibited in the media called Auto Motor und Sport include the front and rear profile photos of the vehicle. On the front panel of the vehicle, the headlight and bumper design, which resembles Volkswagen’s electric car family I.D., draws attention, while the biggest change is at the rear. The rear taillights of the vehicle extend along the c-pillar and the Volkswagen logo is located on the rear window. This design shows that the logo design that started with Arteon and continued in the Golf and Passat series continues in Caddy.

Here are the first images from the new Caddy:
Another innovation in Caddy’s design is the chrome piece that runs along the tailgate. Of course, it is not to be observed that the headlights on the front and rear are LEDs. Another similarity of Caddy to other passenger models of Volkswagen is its platform. The modular platform MQB, which has been used in passenger models since 2012, is also featured in Caddy. In this way, semi-hybrid power options in the new Golf can be used.

Other details of the new Volkswagen Caddy are expected to appear in the coming days. It is also among the information that the design differences in Caddy will appear in the new Transporter.

The current Volkswagen Caddy, which has been on the market since 2003, has undergone two major changes, one in 2010 and one in 2015, but still continues to use the platform components of Golf V and first generation Touran. It was said that the popular commercial vehicle of the German brand would switch to the MQB modular architecture when the fourth generation model arrived.

The fact that the new Caddy will switch to the MQB modular architecture of the German brand is an important development in itself. It was also announced that the 2020 Cady will also use the hybrid engine system.

Motorola Edge+ will be released on April 22