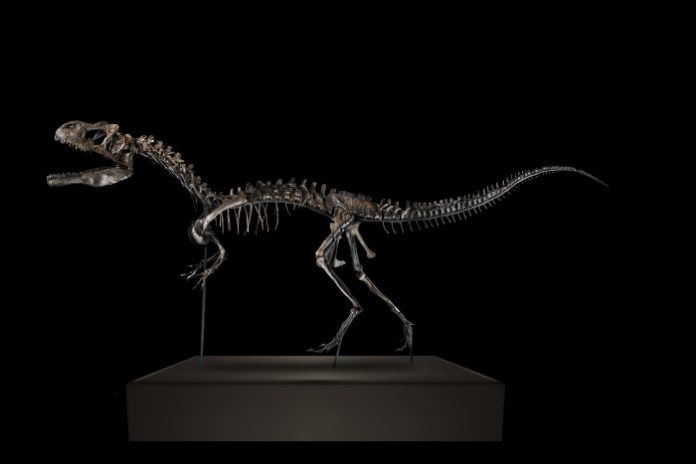 A newly discovered dinosaur species has been on display at the Natural History Museum in Utah, USA. While the newly discovered species belongs to the genus ‘allazor’, the dinosaur is estimated to have lived 150 million years ago.

An important fossil began to be displayed in the Utah Natural History Museum. This fossil belongs to a meat-eating dinosaur that lived 152 to 157 million years ago. It is estimated that the new dinosaur species, the first examples of which were unearthed in the 1990s by paleontologists, lived in the west of North America.

The new species is the most common of its era and the most predatory predator:
‘Allosaurus jimmadseni’; a short and narrow skull has characteristics such as crests that start from the horns and extend from the eye to the nose. ‘Allosaurus jimmadseni’s cousin’ evolved 5 million years before fragilis; It is considered to be the most common and predatory predator in the ecosystem. The new species has relatively longer legs and tail, and long arms with three pointed claws.

While ‘Allosaurus’ means ‘different reptile’, ‘jimmadseni’ in the second part is a name in memory of paleontologist James H. Madsen Jr. who discovered the species. The ‘Allosaurus’ genus, discovered in 1877, soon became the best known jura era teropod. The classification of the species in this genus has been causing controversy in the paleontology community for 130 years. While it was previously thought that North America only hosted 1 (fragilis) species in the jura era, the number rose to two with the new discovery.

George Engelmann discovered the skull of the fossil in 1990 at the Dinosaur National Monument site in Utah. Scientists think they can find other species of allazor species in the west of North America. Some researchers suggest that 12 different species might have lived in the Jurassic period in North America.

Coronavirus: learn how to use your PC to fight the pandemic

Claim: Apple to Launch 4 iPhone with 5G Support and OLED...

How to generate boleto at Banco Inter to receive payments

Radiant Kim Kardashian: she poses with North and Saint on Instagram!