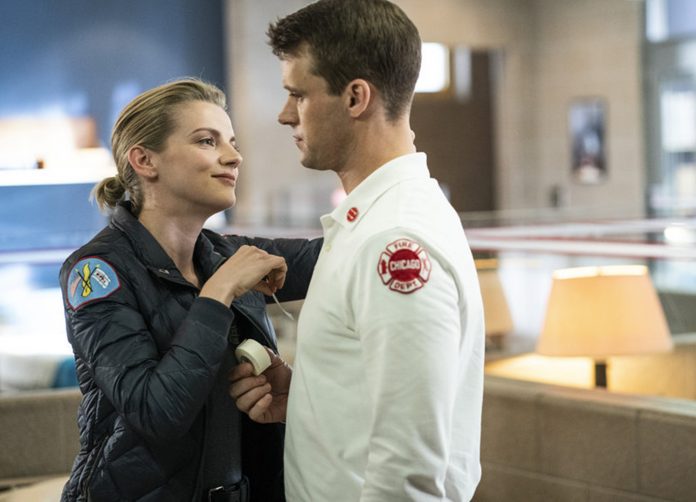 Chicago Fire returns this Wednesday, January 28 with a new episode of season 9 that has raised the concerns of fans of the fire action drama that NBC airs.

Chicago Fire fans are witnessing what has happened between Brett and Casey lately. When everything was believed to be on the right track, Brett’s questions and concerns and Casey’s silence regarding what she thinks and feels about the paramedic, threw everything back.

With the first episode of Chicago Fire aired this year, Casey and Brett were expected to continue their conversation in substantial ways. Unfortunately, things did not go as expected.

Apparently, with the next episode of Chicago Fire, the relationship between Brett and Casey will become even more complicated, as new characters that were included in the series will be the possible obstacles between them, according to the showrunner of the series Derek Haas told TV Line. .

Also, during a recent interview, Chicago Fire star Jesse Spencer revealed that one of those rookies does, in fact, catch his character’s attention in a romantic sense. This is what the actor told TVLine:

Meet this girl. She has a car accident, she is quite an attractive girl, and she comes out with a joke in the middle of this rather intense incident. It’s weird, and it’s quite funny and, I guess, refreshing to have a sense of humor in such a dangerous situation. So they caught it off guard and met a couple of times, and I guess they have a couple of dates. ”

In this sense, Brett will not be left behind during the next episode of Chicago Fire season 9. In this regard, Kara Killmer commented the following to TVLine:

“There is a new character that comes from another fire station that interacts with Brett. It is an obstacle in every sense of the word. Brett is trying to take up space. He’s trying to get over his feelings about Casey and he’s trying to move on. “

It will show a big change in the continuity of the...