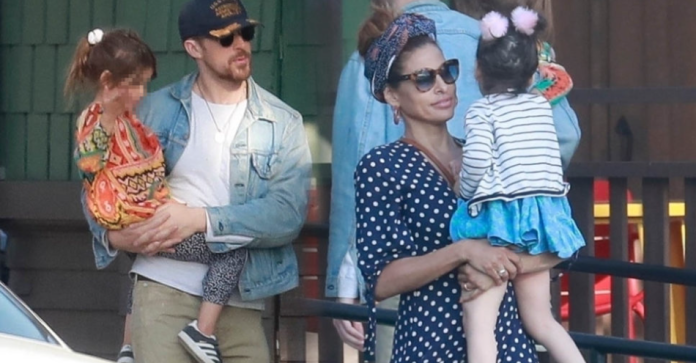 Young couples in Hollywood always love to share their unique parenting tips with the whole world. For example, Ryan Reynolds and Blake Lively necessarily tell funny stories about their children every time they are asked about them. Well, this is nothing new, but Ryan Gosling and Eva Mendes have some unique parenting tips. Eva is quite active on social media, and this time she has something to say.

Eva Mendes is quite popular thanks to her hilarious responses on social media. Moreover, from time to time she writes about her upbringing. However, the couple is very careful about the privacy of their children. They have two beautiful daughters Esmeralda, 8 years old, and Amada, 6 years old. The couple, although not married, has been raising children for a long time.

Mendes recently posted a photo of herself with an optical illusion on Instagram. With her head centered under a platter of fake fruit and fury in her eyes, Eve completely kills him. Most importantly, she posted this photo with a caption of one word “motherhood”.

It is difficult to decipher what the actress meant by this signature, but one thing is for sure: there is a funny meaning behind it. Although there is no context in the picture, her fans seem to like her. They expressed their love by commenting on the picture. One called it “magic” and the other called it “the best.”

Although Eva fully accepts motherhood, she has said in the past that she initially did not want to be a mother. In an interview, she said she has no plans to have children until she meets her partner. They have both been together for 11 years and seem very happy together.

According to Hello, she said: “I never wanted children before until I fell in love with Ryan, and it somehow worked out when I was 40 and had my first child.” She was 42 years old when she gave birth to the second.

Eva Mendes did her job by posting a picture with a caption with a hidden meaning. Let us know in the comments if you decipher it.