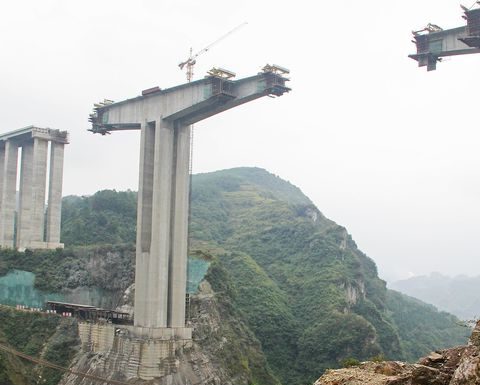 An Austrian team of engineers has developed a new technique called ‘umbrella’, which allows building much faster, cheaper and superior bridges. The new technique is built and opened like a ‘closed umbrella’, unlike traditional bridge construction techniques.

Engineers from the Vienna University of Technology ( TU Wien ) in Austria have developed a new technique that will make it easier and cheaper to build bridges. With this new method called ‘ umbrella method ‘, it seems that it will be possible to build bridges faster, cheaper and more advanced.

It turned out that the engineering team at TU Wien has been working on this technique since 2006 . Since then, the team has experimented with the technique and developed it with fine tuning, leaving traditional bridge construction techniques aside. These traditional methods include installing scaffolding, placing reinforced concrete bars and filling the interior of the building with concrete.

With the new technique, the bridge is built like a ‘ closed umbrella ‘ and then ‘opens’ to its final position. Afterwards, carved beams are filled with concrete and other elements of the building are completed. Designer Johann Kollegger notes that it takes months to build a bridge by building a scaffold, the elements of the new balanced lowering method can be installed in two to three days, and the lowering process takes around three hours .

The sample bridge of the team was built on the Lafnitz River. While the span between the feet of the bridge reaches 72 meters, the sections can be connected to each other with chains in daisy-shaped chains or to longer bridges. Each beam of the bridge weighed over 50 tons and was lowered carefully and symmetrically over a long period of time. Evenly and steadily lowering of heavy beams was carried out using hydraulics .

Although it is not explicitly stated in the description of the TU Wien team, it seems that the new technique will open the way for the development of the constructions to be made on short distances but on deep cliffs. For example, the Himalayas or the south of China motorways and iron ways this technique can come up to. With the new technique really being introduced, this type of viaduct and bridge construction can become both faster and safer.

Nam Yoon-soo describes the similarities and differences with his character from...

Doomsday Time Comes So close to the First Time Since 1953