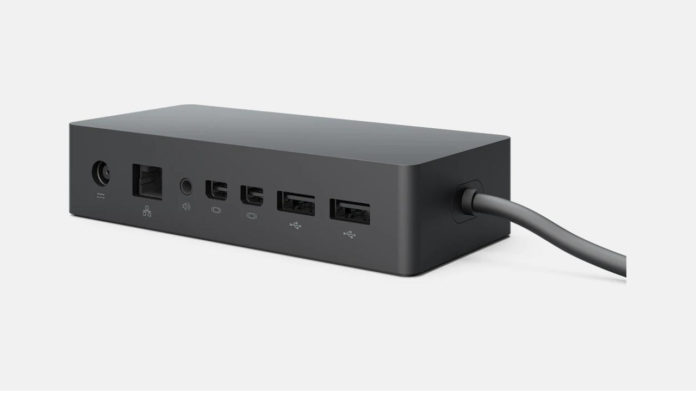 New information has been released, which is stated to belong to the new version of Surface Dock, which Microsoft did not develop after the release in 2015. The Surface Dock 2 is said to have two Type-C ports instead of the first two Mini DisplayPort.

Microsoft launched the Surface Dock in 2015. This apparatus, which you can turn your phone into a computer almost, had 3 USB ports and HDMI inputs as well as two mini DisplayPort. However, for about four and a half years, the new Surface Dock has not met users. Now, a record pointing to Surface Dock 2 has appeared on a Belgian e-commerce site. The value of the product in the record is $ 267.

Although there are not many details about the features of the device. According to the news of Windows, there are persistent improvements in the device, but the form factor and design are preserved. Instead of two mini Display Ports on the back of the first version, Surface Dock 2 has two Type-C ports. The Ethernet port, audio input and two USB Type-A ports are expected to be included in the new device.

The power supply is developing
In addition, there is an ambiguity as to whether the two Type-A ports on the front are replaced by Type-C ports, if that is the case, it will be a giant step for Microsoft. Microsoft has been hesitant about adding new ports to its devices for a long time, and has arguments against adding ports. If the news is true, it will be a surprise development for Microsoft.

Regarding power, it is stated that the new device will increase the 95 W power from the old device to 200 W. This innovation is also pleasing for users because devices like Surface Book 2 use a lot of power when they have difficulty. The upgraded power option is also pleasing considering the devices like Surface Book 3, which are expected to come out with more powerful features. It is also said that the new device will come with a longer cable.

Dr. Windows found the record ‘MICROSOFT Power Supply 127 w’ for Surface on a Dutch site. It is not known whether Book 3, which is the rumor that this product will be available, is an accessory. The charge of the current Book 2 device is 102W. The thing written on the site for Surface Dock 2 is that the product will be in stock within 15 days. Surface Book 3 and Surface Go 2 were expected to hit the market in March, but it seems that these plans have changed due to the new deadly coronavirus outbreak. Although it is clear that Microsoft is preparing to release these products, there is no information on history. It is not surprising that the accessories are presented to the users with these two devices.

Photos from Thor and Thor Love and Thunder filming