Home News New images of heartbreaking Russia from plane crash in Russia where 41... 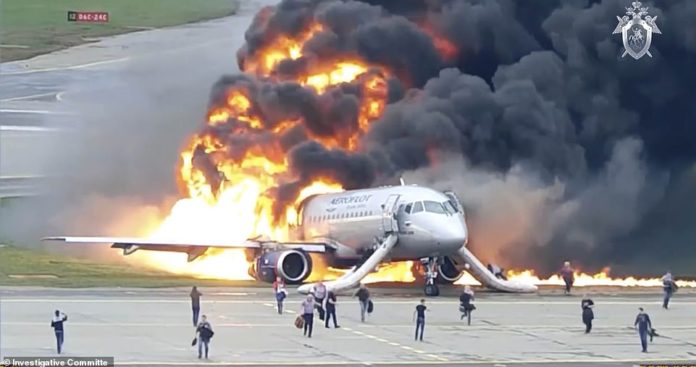 The plane crash, which buried 41 people as a result of a short time of fire after landing at Sheremetyevo International Airport in the capital of Russia last year, frozen the blood with its new images. Here are the moments when the passengers on the plane fight for survival.

Sukhoi Superjet 100-95B type passenger plane, which made the Moscow Sheremetyevo – Murmansk flight on May 5, 2019, returned to the flamethrower shortly after an emergency landing at the Sheremetyevo International Airport in the Russian capital, Moscow. In the tragic accident, 41 people on the plane, which had 73 passengers and a crew of 5, were burnt and died.

The Russian Investigation Committee, who is tasked with investigating the cause of the accident, has released new footage of the terrible accident. The video, which appeared a year later, shows that the plane slides sideways in flames. Emergency landing gear opens after the aircraft stops and passengers inside go out with their own efforts.

It was stated that the fire broke out as a result of the blow to the tail section during the hard landing of the plane.
In the images, we witness that the firefighters who came to the scene soon intervened in the fire, but this effort did not prevent 41 people, 2 of whom were children. Nevertheless, it is a great chance that 37 people survived this terrible accident. Because the published images show that a much larger tragedy is turning around.

A total of 41 people died in the accident, 37 people were saved
It was said that the fire on the SSJ-100 type passenger plane belonging to the Russian Aeroflot company departing from Sheremetyevo Airport caused a blow to the tail section during its hard landing. Speaking to Sputnik from the Russian aviation agency Rosaviatsiya after the accident, reported that the crew had a communication problem some time after the plane took off, saying that he asked for a return authorization to Sheremetyevo.

The manufacturer company Sukhoi announced that the Superjet 100 model aircraft, which is a tomb for 41 people, was produced in 2017, and it was under planned maintenance in April last year. The stage of the investigation launched after the tragic accident is currently unknown.

Ivanka Trump denounces after WSU removes her as a ceremony speaker