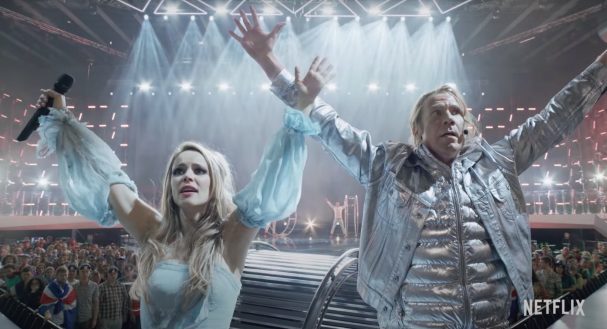 Netflix made a new movie this year based on the Eurovision contest that could not be held due to the coronavirus outbreak. Describing a group’s journey to Eurovision, Eurovision Song Contest: The Story Of Fire Saga will be on Netflix on June 26. The cast has names like Will Ferrell and Rachel McAdams.

The coronavirus epidemic, which affected the whole world this year, disrupted the balances in daily life. Many of the events planned to be held this year due to the outbreak have been postponed or decided to be held in a virtual environment. There were even completely canceled events. One of the canceled events was the Eurovision Song Contest, an international song contest held annually.

The cancellation of Eurovision has disappointed many music lovers, but the good news came from Netflix. Netflix decided to shoot a movie with the opportunity that Eurovision could not be realized this year. Describing the Eurovision dreams of the two singers living in the town, Eurovision Song Contest: The Story Of Fire Saga will be on Netflix screens on June 26.

Netflix’s new movie; On the one hand, while Eurovision reveals our longing, he will laugh the audience with his fun lines. In the film, in which the director is sitting, David Dobkin is seen with quite famous names. In the movie, starring Will Ferrell and Rachel McAdams, Dan Stevens, Pierce Brosnan, Natasia Demetriou, Jamie Demetriou, Demi Lovato, furlafur Darri Ólafsson accompany these duo.

Shaped around Will Ferrell and Rachel McAdams, the movie offers viewers a fun 2 hours. The two reveal the story of two singers dating together in a small place, dating back to Eurovision. The music band called Fire Saga will share their trump card in this international music competition on behalf of Iceland. It is worth watching how the Fire Saga, which is claimed to never win, will go.

Although Eurovision, which is watched by millions of people with excitement every year, cannot be held this year, Netflix’s attempt to compensate for this situation seems to have attracted the attention of music lovers. As mentioned earlier, you can access Eurovision Song Contest: The Story Of Fire Saga from Netflix starting June 26.

Ryder and Hawkins tell the origin of their faction with Edge...