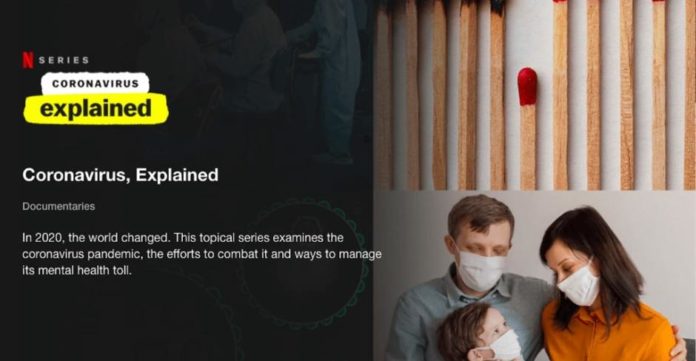 The first episode of Explained, the documentary series ‘Coronavirus’, which tells the story of the coronavirus affecting the whole world, was broadcast on Netflix. The second and third episodes of the series are expected to air in the summer.

The Explained series, which was launched in 2018 with the cooperation of Netflix and Vox, made a great impression and marked the market. The first sections are; It was supported not only with a second season, but also with special episodes and independent series. In the 25-minute sections on a specific topic, information about the topic is conveyed. One of the 10 episodes in Explained’s Season 2, which came out in 2019, was about the epidemic, and now that episode has been expanded into a mini-series. The reason for this is to explain the coronavirus epidemic that the whole world has been struggling for months and to ask the department to be updated.

The new 3-part miniseries, called ‘Coronavirus, Explained’, is descending to the origin of the coronavirus, which is already active, explaining to the audience the virus. The series, which informs the audience about what to do against the virus, is a question asked by everyone, “What will happen after the outbreak?” It provides the viewers with information about the subject by searching the answer to the question.

How the coronavirus outbreak started:
Many viruses have passed from animals to humans for years. These viruses are also known as zoonotic viruses. Scientists believe that the coronavirus has passed through the bat, but this virus may have spread to animals such as fish and snakes before reaching humans.

Experts stated that they estimated that there were half a million viruses in the wild last year and did not know about them, any of these viruses could spread to the human population.

Quarantine is the most effective way to prevent the virus:
During the outbreak in 1918, it was understood that the quarantine was the most effective way to prevent the epidemic. The most important move against coronavirus is to stay at home. Experts state that the only way to get rid of coronavirus completely is the vaccine. Although vaccination studies continue all over the world, experts do not expect the vaccine to be available any time soon.

Here is Coronavirus, Explained’s trailer:
Coronavirus, the first of the 3 episodes of Explained, was broadcast on Netflix on April 26. In the first part published, the episode previously made about the outbreak was renewed and updated. The second and third episodes of the miniseries are expected to be released in the summer, but no official date has yet been specified.

The 65-year-old actor J.K. Simmons, Coronavirus became one of the famous actors who contributed to the series by undertaking the voiceover of Explained. Oscar winner Simmons made it more understandable, such as a coronavirus, to make it more understandable for viewers than before. You can also remember Simmons as a music teacher in the Whiplash movie. The successful actor also attracted great attention for his role in that movie.

7 quotes from BTS’s BE album that will enlighten you