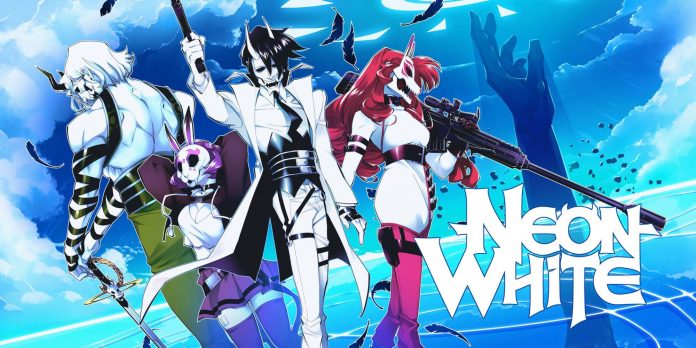 Neon White is a mix of genres: high-speed passing, platforming and solving puzzles inside FPS. This is somewhat reminiscent of Ghostrunner, which uses several unique mechanics to provide an exciting, memorable and fascinating experience. Neon White, developed by Angel Matrix and published by Annapurna Interactive, puts players in the mask of a demon killer named White, who has a severe case of amnesia. As players make their way through hordes of demons and a variety of levels, the mystery of who White is and what is really happening begins to unfold.

The first thing that sets Neon White apart is the manga–inspired art style. Although each of the game’s characters seems a bit cliched — for example, White is a sharp protagonist in the style of Sasuke — the way they all interact with each other makes these clichés cute. On the other hand, it completely matches the dating simulator dialogue without adding the dating simulator mechanics, so players who don’t like this style will find a lot of dialogues and cut scenes a little excessive.

Related: Fire Emblem Warriors: A Review of Three Hopes – The Perfect Combination of Combat and History

What really makes Neon White shine is the gameplay, which uses a card system rather than a traditional weapon matching system. Each weapon is represented by a card, and only two different cards can be held at the same time. Although this weapon is used to kill demons, it is much more important for platformers. This is due to the additional ability of each weapon, which is activated when the player drops this weapon: for example, an additional jump for a pistol, unlocking the hook with a rocket launcher and a jerk with a rifle. As the game progresses, it pushes players to use these abilities more creatively, and although it takes some time to really get used to it, the feeling of flow that results from achieving this is very pleasant.

The faster the player completes the level, the better. Neon White takes place near Heaven, where tainted souls (called neon) fight demons and each other to gain the highest rank and spend a year in Heaven. To get higher ranks, players need to pass levels at higher speeds, because in certain time ranges medals are awarded, which go to increase the rank. To guarantee a rank increase at the end of each course, players must receive first-class or gold medals. Fortunately, Neon White perfectly helps players get used to faster and more creative thinking, so it’s not difficult to achieve a fairly fast time.

Neon white does fall into some traps that are especially difficult to avoid in a speed-based game. The biggest problem is that when passing a level, it’s easy to turn around or miss something. Players are not penalized for starting a level higher than is good, but it can be very frustrating to be near the end of the course and not clearly see where white should go next, or accidentally miss the right card, because it’s hard to tell how close you are to the icon when driving at higher speeds. Because of this, killing demons can also be difficult, since weapons don’t have infinite ammo, and success windows are compressed, so players need to be precise. While this won’t be too much of a challenge on a PC, it will be a real challenge when playing on a Nintendo Switch.

Overall, Neon White is a fantastic game that makes players get faster and faster, addictive and supportive. Diving into the flow of a level is empowering, and there are even a few boss fights that add a refreshing twist to levels that were otherwise platform-heavy. Those who decide to play on PC will most likely get a smooth and smooth gameplay, but the Nintendo Switch version has difficulty with accurate aiming and hand-comfort. Despite this, players will not make a mistake by choosing any of the versions, because Neon White is, in fact, a fun and inspiring experience.