Home Entertainment Neon White: how to get (use) Heavenly Delight tickets 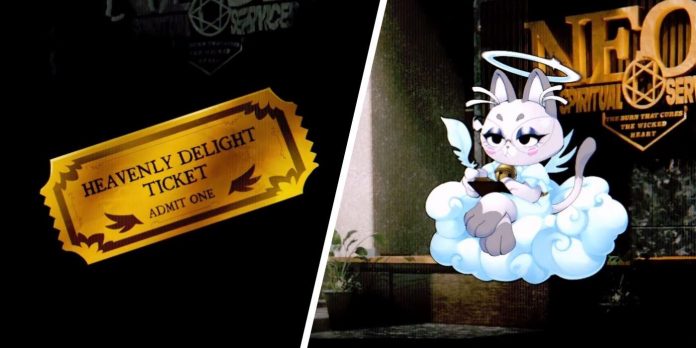 Heavenly Delight tickets are a unique currency in the Ghostrunner–like Neon White shooter platformer that players can earn to receive special rewards known as Heavenly Delights. Heavenly delights are given to the main character as “early access” Heaven prizes for high-ranking neons. These prizes are summed up, that is, they need to be received sequentially. For example, the first Heavenly Delight collectible in this action platformer is Ice Cream, and the final top prize is the “rare collectible” Heavenly Katana.

To get a Heavenly Delight Ticket in Neon White, players must achieve a gold rating on all mission levels in this platformer. After this feat is completed, players can visit Gabby at the Central Sky Office from the Central Sky map. After receiving a ticket, the main character can redeem it by going to the cathedral.

Once inside the cathedral, select the “Kiosk of Heavenly Delights” tab. A believer will appear and explain how the ticket redemption process works. Players can also view the Prize Table to see their progress towards the final award and find out what prizes they have already received. After paying off the Paradise Delight ticket, a bizarre cut-scene will play out, showing how White received his award. Since each step in the Prize Board is associated with a special event, parkour and freerun fans can only redeem one ticket at a time.

It should be noted that, apart from the two Achievements mentioned above, the use of Heavenly Delight Tickets in Neon White does not give any advantages in the gameplay. Prizes are a good incentive for players to learn more about the characters and watch an exciting VA video. However, Neon White fans shouldn’t expect too much from their efforts other than having fun with White and his interactions with other non-player characters and characters.

Raven (Call of Duty) Freezes The Strike Before Its Unionization