Home Entertainment NEO: The World Ends With You, analysis. Return to the Reapers Game 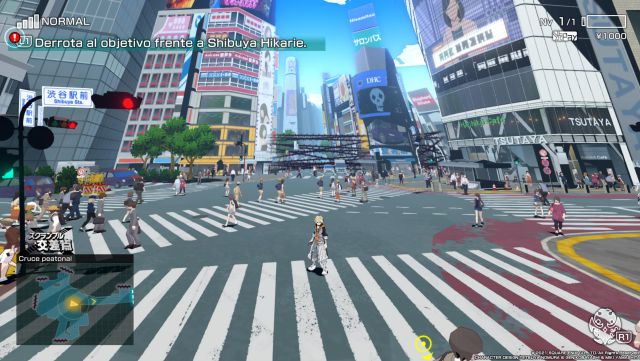 Welcome back to the Reapers Game

A new day dawns in Shibuya and everything seems to move to the usual dizzying pace of this special section of the Tokyo metropolis. Rindo Kanade meets up with his friend Fret to enjoy a delicious bowl of ramen and take a walk around the city as they catch up and move among hundreds of people belonging to various urban tribes, who we can easily recognize by their shape unique dress. Everything seems to be going well, until a sudden accident happens and Rindo watches as a large truck crushes Fret. Without being able to react in any other way than by raising a hand and screaming in horror, the protagonist then experiences a strange event, which takes him back a few minutes in time. Being aware of what is going to happen, he warns his friend and manages to avoid his death … or not?

Shibuya now has a strange and paranormal touch. What could be interpreted at first glance as an action movie shoot, with actors flying through the air and fighting colorful beasts through spectacular special effects is actually something much more complex. Without eating or drinking it, Rindo and Fret find themselves immersed in the mysterious Game of the Reapers, as they don’t take long to discover. Those who already entered this curious version of the underworld years ago will know the ins and outs that make it up, but as long as not to spoil the surprise to newcomers to the title, we will not go into more details. Just to mention that the rules of the game have changed somewhat, so even the experts will find a Game of the Reapers something different and updated, whose mysteries we will not be able to unravel until the last bars of the adventure.

What we can mention is that instead of going in pairs, as in the past, this time we have to team up with characters as charismatic as Nagi Usui, among others and others (new and already known), to face other groups such as the Deep Rivers Society, the Purehearts, the Variabeauties or the Ruinbringers in a fight for supremacy that will determine who wins the game each week and who is eliminated permanently. This new formula has seemed interesting to us in order to greatly expand the possibilities of the combats and the title in general, since by having more allies we have a much richer and more detailed team management capacity. In contrast, this system of teams sometimes abuses a bit of repetitive fights between them. Yes, in NEO: TWEWY we will not only face the monsters that make up the “Noise”, but we will also have to face human adversaries and their special powers through pins like ours.

A Genshin Impact fan points out an impressive chess detail in...