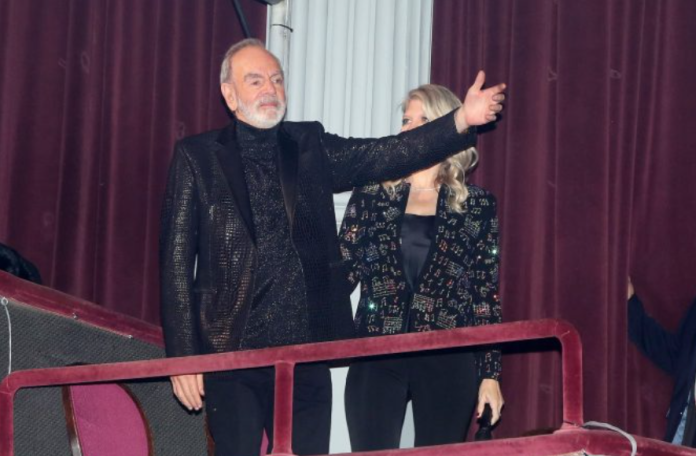 This week, Neil Diamond came out of retirement to sing “Sweet Caroline” during the performance of a new Broadway musical about his life.

The singer announced his retirement from touring in 2018 after he was diagnosed with Parkinson’s disease, and earlier this year rarely appeared at a Boston Red Sox game to perform his biggest hit.

On Sunday evening (December 4) the new musical A Beautiful Noise: The Neil Diamond Musical made its Broadway debut at the Broadhurst Theater with Diamond himself.

Before the show, Diamond appeared on the balcony and got a microphone to sing “Sweet Caroline” with the fans.

Watch the video from the speech below.

This Neil Diamond appearance at 'Beautiful Noise' & his impromptu performance/singalong of "Sweet Caroline" — despite his Parkinson's diagnosis and career retirement — has me in my feelings right now. Join me. pic.twitter.com/u1ejYDYGbW

Announcing his retirement four years ago, a statement posted on the singer’s official website said that “the onset of illness has made traveling and large-scale performances difficult, but will allow Mr. Diamond to continue composing, recording and developing music.” new projects”.

Diamond said of the news: “It is with great reluctance and disappointment that I announce my retirement from the concert tour. It is a great honor for me to present my shows to the public for the last 50 years.

“My sincere apologies to everyone who bought tickets and was going to come to the upcoming concerts. I plan to stay active in writing, recording and other projects for a long time.

“I thank my loyal and devoted audience around the world. You will always have my appreciation for your support and encouragement. This trip was “so good, so good, so good” thanks to you.”

In March, Diamond sold his entire catalog of songs and recordings to Universal Music Publishing Group for an undisclosed sum.

In addition to his edition and masterclasses, the deal includes 110 unreleased tracks, an unreleased album and archival video footage.

Eric ten Hag Will Have to Solve The Main Mystery Before...