Home Science What is this near perfect ultraviolet arc in the Big Dipper? 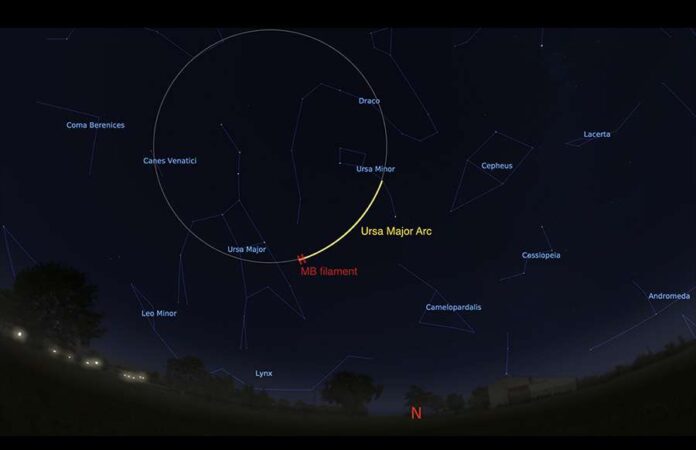 Astronomers recently observed a strange arc of ultraviolet emission in the vicinity of the Big Dipper, bringing new elements of understanding to a mystery almost 20 years old. This one would be the vestige of a star explosion which would have opened a window on the cosmos.

Researchers recently observed an amazing source of ultraviolet light. Like a fraction of an almost perfect circle, the structure extends in an arc of 30 degrees, centered around the “handle” of the Big Casserole, in the constellation of the Big Dipper. Thanks to further analyzes, the researchers were able to suggest an origin and a composition for this surprising appearance.

Formed from compressed and energetic interstellar gas, it would actually be a shock wave, coming from a star explosion or a supernova. The distance and age of the cosmic event at its origin remains uncertain, however researchers estimate that it would have taken place more than 100,000 years ago, at a distance of about 600 light years.

“A bizarre straight line in the sky”

The surface covered by this atypical cloud indicates that the explosion could have been partly responsible for the creation of a “window” above the Sun: an area free of most of the gases and dust that obstruct it. normal time.

“This region of the sky is known for its many interstellar windows, used to study the properties of galaxies outside the Milky Way. This arc could be the proof of one of the explosions at the origin of these windows “, explains Robert Benjamin, co-author of a new study published in the journal Astronomy & Astrophysics Letters.

The discovery of the arc dates back to 1997, when astronomer Peter McCullough observed it for the first time in H-alpha, a hydrogen emission line often used for the observation of the Sun. At the time, he had detected only a fraction of the structure, a straight line with a length equivalent to five moons placed side by side. He later mentioned this strange object to Robert Benjamin. “In astronomy, you never observe perfect straight lines in the sky,” says the latter. It really interested me, and Peter and I wrote a paper together saying in essence “There is a weird straight line in the sky, what could it be?” ”

A quest for more than 20 years

Since then, the arc has been found by researcher Andrea Bracco in the archives of Galex, a former Nasa ultraviolet telescope intended for the study of star formation. “Honestly, I couldn’t believe that such a large structure in the sky could be unknown to this day. I had before me ultraviolet observations going back 15 years, ”he recalls.

By comparing the brightness of the emission in two different ultraviolet bands, the researchers were able to confirm that the arc would consist mainly of compressed hydrogen. The study presented by Robert Benjamin and Andrea Bracco offers a summary of this investigation, more than 20 years old: the discovery of a cosmic giant hidden before our eyes.