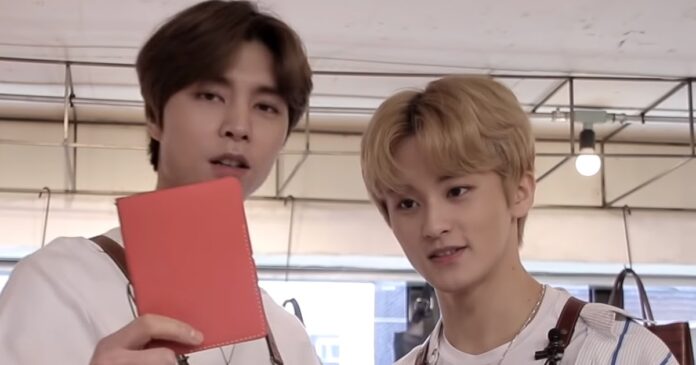 NCT’s Mark and Johnny take a European tour from home in front of their fans. Mark and Jhonny showed that you can have fun without leaving home. Account NCT in V Live surprised fans with a live broadcast where Mark and Jhonny conducted a trip to Europe from home.

This was announced by the title of this broadcast. The boys logged in from their V Live account and started introducing themselves in French , to make things easier they tried to imitate the way the online translator pronounced the messages they wanted to convey to the fans, but the difficulty made this scene a fun moment.

Mark and Jhonny had some sandwiches in front of them to taste during the broadcast and also a hat in the colors of the French flag, noting that the first stop on this tour of Europe was precisely France .

While the boys chatted with the fans, Mark served some drinks for them and, after eating and interacting with his followers, the boys decided that it was time to change their ‘ geographical area ‘.

They covered the camera for a moment and moved to a different table, where they had some decorations that quickly sent us to London , including one of the traditional red buses and Big Ben. It was then that they began to prepare some tea with the ingredients in front of them, adopting an English style.

The boys had a lot of fun trying to cook, and someone in the comments mentioned that Jhonny sounded like Shrek, whereupon this idol started to imitate said character while shouting ‘donkey’, calling the other main character in the movie.

Pointing to the image that was taped to the wall, Jhonny said that his bus was approaching as he could already see it and, shortly afterwards the boys said goodbye ending the transmission.

WayV recently released a futuristic-style music video for their song Turn Back Time and, among the news shared by Mark and Jhonny, they mentioned that WayV could release a Korean version for this same video.