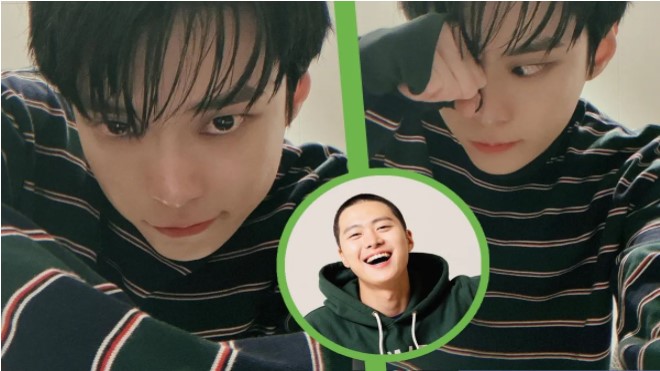 Doyoung sent his good wishes to his brother now that he has just enlisted, let’s tell you what the NCT member said to him and everything about this moment.

Although military service is a duty that all Korean men must fulfill, it is bound to become an emotional time for them, their families, and friends, as Doyoung demonstrated when his brother left to enlist.

SM Entertainment’s idol is the youngest son in his family, but his brother Gong Myung (who is also a famous Korean celebrity) had to leave to fulfill his responsibility as a member of the military on a temporary basis.

Before that happened, the NCT 127 member spent time with him and they took some photos that got the fans excited, so the idol gave him a goodbye message in front of the fans.

The K-Pop singer took to his personal Instagram account to share a bit of this significant moment within his family, so he made a post on his feed where, in addition to including several photographs, he said :

My brother goes to the army. I will welcome you with all my heart when you return

In the images we see photos of actor Gong Myung after shaving his head, some of them with the vibe of a photo studio while in others Doyoung appears recharging his forehead to his brother.

Also, the singer wished him to have a good experience and stay safe, so fans joined in the good wishes by leaving comments on this artist’s post. AWW!

Gong Myung is a Korean actor represented by Saram Entertainment, we have seen him in dramas like Bride of the Water God, Be Melodramatic, Feel Good To Die, Revolutionary Love and more.

This celeb she was born on May 26, 1994 so she is currently 27 years of international age. His most recent K-Drama came out earlier this year and goes by the name Lovers of the Red Sky. Following his enlistment for military service, his company said:

We ask for his warm support for Gong Myung, who will return after faithfully completing his military service duties as a citizen of South Korea.

In other K-Pop news, we told you that GOT7’s Youngjae is ready to release a new tune, you can already check out the teaser for Walk With Me.

IVE achieves its first win and sets a new record as...