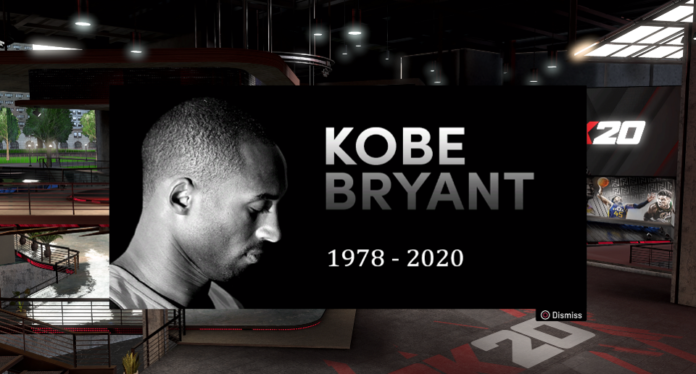 The popular basketball game NBA 2K20 did not forget to mention the legend of NBA legend Kobe Bryant who lost his life with his 13-year-old daughter in a helicopter crash in California last night. The iconic basketball player who succeeded in choosing All-Star 18 times was 41 years old.

Kobe Bryant, one of the symbol actors of Los Angeles Lakers, died in a helicopter crash yesterday evening in California. Besides the iconic name, his 13-year-old daughter Gianna Maria-Onore Bryant, who was a basketball player like him, was also present.

NBA 2K20, the world’s number one basketball game, did not forget to remember Bryant, who said goodbye to his loved ones when he was 41 years old. Placing a black and white photograph of the legendary name’s birth and death dates on the start screen of the game, 2K Sports confronts us with this fact that we still do not want to believe.

Farewell image to Kobe Bryant on the home screen of NBA 2K20
The iconic basketball player, who has been the NBA champion five times throughout his career, was the cover star of the NBA 2K10. Every Bryant version available in the game has become one of the most loved. It is really hard to put this tragedy into words about basketball, sports and the world. Touching the hearts of millions of people around the world, Bryant was the one who loved basketball for a generation.

Kobe Bryant said goodbye to his beloved basketball in 2016
NBA legend, which earns the respect of almost everyone not only as an athlete, but also with his personal life, is no longer with us. Bringing his eyes to life with his beloved daughter Gianna, Bryant will now live only in our memories. Kobe congratulated Lebron James, who passed himself as the third highest scorer of all time with 33 thousand 644 points the night before he died.

Having accomplished many things called impossible during his 20-year career, Bryant has been involved in the NBA All-Star organization 18 times. The symbol name, who won the five-time championship with the Los Angeles Lakers, inspired millions of athletes who wanted to be like him.