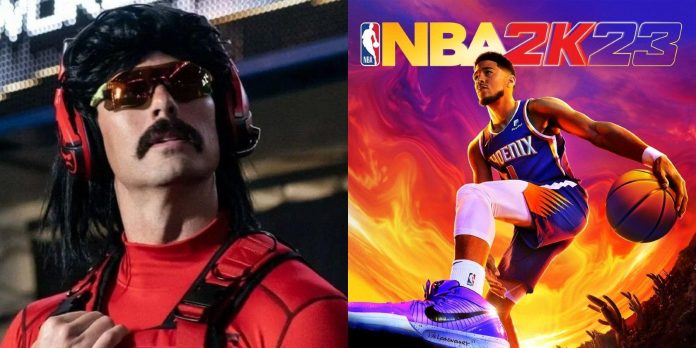 On the eve of the release of NBA 2K23, it turns out that the game has cosmetics based on the YouTube streamer Dr Disrespect. NBA 2K23 is the latest installment of a successful basketball simulation series developed by Visual Concepts and published by 2K Games. With the launch of the game, many Two-Time fans are happy to see the famous image of the streamer presented in the game.

The possibility of the appearance of cosmetics on the theme of Dr Disrespect in the game appeared after the tweet of the streamer. In a message dated September 8, Dr Disrespect hinted at these novelties in NBA 2K23, noting that he had heard a lot of rumors about his inclusion in the sports game. He then addressed his fans, saying, “See you in the game tomorrow… literally.” However, players didn’t have to wait long to see what the streamer meant, as images were posted on social media revealing the meaning of Doc’s tweet.

Judging by the images, gamers can choose several cosmetic items in MyCareer mode, decorated in the style of the cult image of Dr Disrespect. First, players can earn “Dr Disrespect Black Steel Mullet + Headphones” when they reach level eight. In addition, at level 20, you can unlock “Dr. Disrespect Prototypes”. These are the iconic shades that the streamer wore during his broadcasts. In addition, the branded red Two-Time vest, known as the “Dr Disrespect Showtime Vest”, can be obtained after obtaining the 32nd level in the game.

While these Dr Disrespct-style cosmetic items in NBA 2K23 are intriguing, their inclusion actually makes some sense. Doc is known for his famous phrase “Violence. Speed. Momentum.” He even boldly declared that he is the greatest athlete in the history of video games. In addition, the popular YouTube streamer played college basketball, attended NBA basketball games and even recently posted a video of him making a 70-yard pass at the San Francisco 49ers football camp. Needless to say, he has a history with sports.

Since the news about this cosmetics was published on the Internet, many fans of the streamer turned to social networks to comment. Unsurprisingly, many gamers were excited about the opportunity to unlock gear based on Two-Time. Images of cosmetic items in the style of Dr Disrespect in NBA 2K23 distributed on Twitter have already managed to collect thousands of likes.

Although this inclusion of Dr Disrespect cosmetics in NBA 2K23 is of great importance to many fans, this is not the only news concerning the streamer. In addition to having his famous outfit featured in other games, Doc continues to play games live. Recently, Dr Disrespect made some bold statements about sniper rifles in video games, claiming that they should all be shot in the head with one shot. It is not surprising that this caused a discussion in social networks. Time will tell what news the scandalous streamer will do next.

Castlevania: Season 4 will be the last of the anime on...