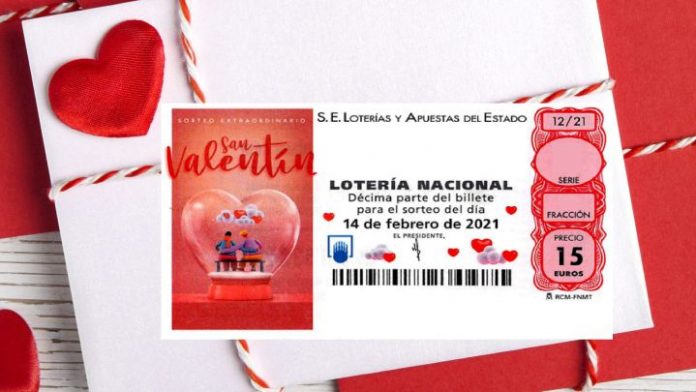 After starting the year with the traditional draw for the Child, the next big date in the Spanish lottery is precisely the one that is about to arrive, on February 14 or Valentine’s Day. This year 2021 the Extra Valentine’s Giveaway is held on Sunday at 9:00 p.m., so if you have played a participation and want to know if it has touched you, here are the websites and apps with which to check it for when it is celebrated the draw.

With an issue consisting of 10 series of 100,000 tickets with a prize of € 150 each and divided into tenths with a price of € 15, the total that the Valentine’s Day draw will distribute will be 70% of the circulation, which is equivalent about € 105 million in prizes.

But like any great raffle, there is a special accumulated prize of no less than 15 million euros for a single fraction of one of the tickets awarded with the first prize, as published on the LaPrimitiva.com website:

Each National Lottery purchase consists of the acquisition of one or more tenths of a five-digit number that participates in a draw with previously established prizes and available numbers. In the National Lottery, 70% of the proceeds are allocated to prizes. The price of each tenth is variable according to the draw, and you can choose the desired number or allow the system to choose it for you (random tenth).

In the case of the Valentine’s Day draw, if you enter this link you will directly access the screen to choose the number you want to play. But there are more ways, like the ones we tell you below:

The best-known app of all could not be missing in this list of apps and websites to buy Christmas Lottery. You simply need to become a user, indicate the bank account where your prize will go if it is your turn and buy your tickets. It has an encryption system to protect the data of whoever uses it, that way no one other than you can claim your prize. It is available for both iOS and Android smartphones and on its website.