NASA’s Curiosity Discovery Tool Sent a Bleak Photo from Mars. Curiosity, NASA’s exploration vehicle, continues its journey on Mars and the exploration robot sent a desolate and bleak image of its ongoing work at Central Butte in Gale Crater.

NASA’s Curiosity expedition on the Red Planet continues its expedition on Mars. The traveling robot continues its work at the Central Butte in Gale Crater and examines the weathered layers of rock at the base of Sharp Mountain from the slope in the middle of the crater.

The reconnaissance sent a new photo, where the robotic eyes are fixed to Mars’ horizon. The image was taken on November 1 using Curiosity’s Right Navigation Camera B (or Left 2573), capturing a view of the coast of the crater. In the foreground there is a hill with a slope towards the mountain and a misty view of the Gale Crater, which was created by a giant meteorite hit billions of years ago.

In the image, Curiosity seems to be taking home the findings of his work in his solitary position. When the Opportunity failed to shut down and charge their batteries, communication with the Earth was cut off, and Curiosity remained the only vehicle to investigate Mars. 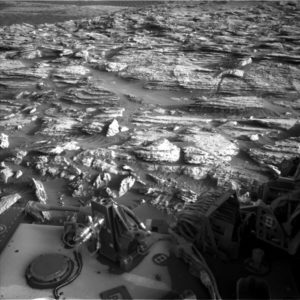 Central Butte is a very interesting geological point, with sedimentary rock layers that have hints of the presence of water in the region in the past. Curiosity will attempt to measure their dimensions by examining these sedimentary layers. The exploration vehicle explores the types of rock in the region. The data will help to characterize the stratigraphic units in the rocks and their relations with each other.

The traveling robot will also take pictures of an area at the top of the hill, which is very difficult to reach, but within the viewing distance. “After all these observations, Curiosity will begin to wander around the hill to look the other side. We expect to continue to see the spectacular Central Butte sights at our next stop,” Kristen Bennett, a planet geologist from NASA’s Mars Exploration website, US Geological Survey, says.