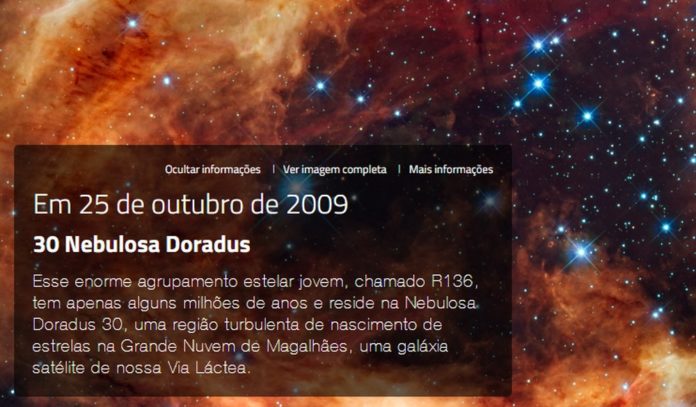 NASA created a special website to show photos of the space captured on the visitor’s birthday. The results can be constellations, nebulae, different stars and celestial bodies, with their respective names and technical information. The images were captured over the past 30 years by the special Hubble telescope, which explores the universe 24 hours a day. The action is part of the celebrations of the thirtieth anniversary of launching the satellite into space.

To discover your birthday photo, just go to imagine.gsfc.nasa.gov/hst_bday/ and fill in the day and month of your birth. The image of the space is displayed immediately, informing the year in which the photo was taken and showing a card with the explanation of the star. The site allows the user to open the image in full screen, in better quality, access the complete file of the star portrayed in the photo and even share on Facebook, Twitter and Pinterest.

The Hubble Space Telescope, responsible for the photos displayed on the website, celebrates 30 years of launch on the 24th. It was sent into space in 1990, on board the space shuttle Discovery, and remains in orbit today, capturing cosmic images 24 hours a day. day, every day of the week. The satellite is essential for NASA to discover the existence of new stars, planets or galaxies.

According to the American Space Agency, the in-person events to commemorate Hubble’s 30th anniversary, scheduled to be held from the 24th, have been postponed due to the social isolation of prevention to Covid-19, and must be celebrated until the 30th of September. . Among the actions, is the dissemination of spatial images of the satellite in different European stations.

Kim Kardashian unleashes madness in a dress that can barely contain...

Spotify takes its users to the past with Time Capsule

Marvin Gaye has the best album of all time.