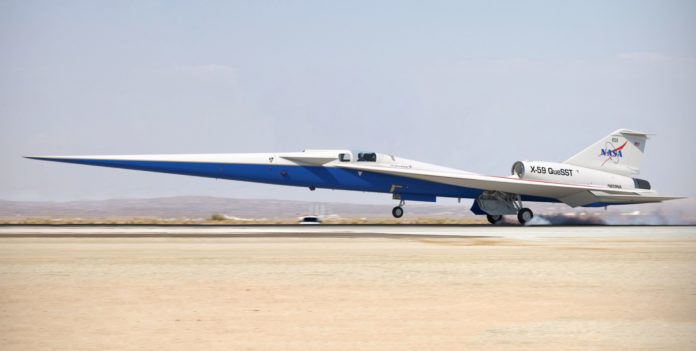 The supersonic jet X-59 QueSST, developed by NASA for commercial transport purposes, is currently under construction. NASA uses parts from old fighter jets to reduce the cost of the aircraft.

The Low Boom Flight Demonstrator Project (LBFD) is known as a commercial aircraft development project that can fly quietly above NASA’s sound velocity. NASA aims to make commercial supersonic vehicles by reducing the sonic explosions of the jets with the project. X-59 is also being developed under this project.

According to the Lockheed Martin company, which makes the X-59, the supersonic jet will be able to fly at a speed of about 1,500 km / h and a height of 16,000 meters, with a low sound intensity of 75 decibels. The aircraft is currently under construction at the Lockheed Martin Skunk Works factory in California.

To keep costs down, NASA used an old Air Force F-16 fighter landing gear in production, a NASA T-38 training aircraft cockpit canopy, a U-2 spy plane propulsion system part, and a control stick from the F-117 fighter. Parts were disassembled from aircraft at the 309th Aviation and Maintenance and Renewal Group at Davis Monthan Air Force Base, Arizona.

Using parts of older aircraft on the X-59 reduces cost, risk, and build time. Thus, NASA does not need to spend resources and money to redesign the parts. In addition, the reliability of the parts used in warplanes has been proven. The X-59 QueSST will be delivered to NASA for test flights in 2021.