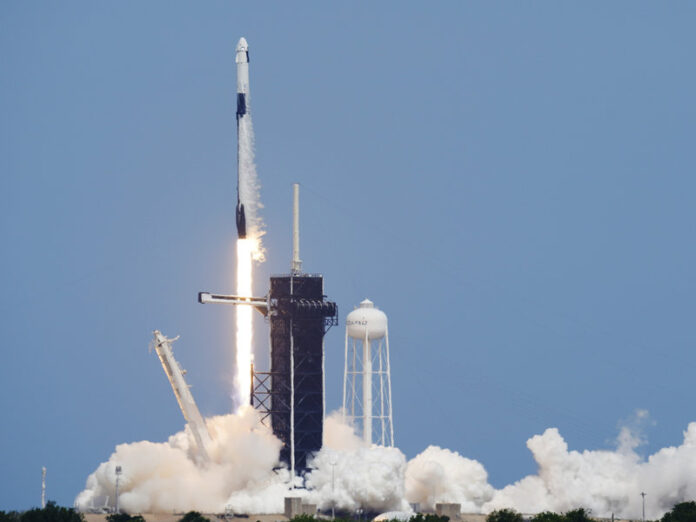 NASA astronauts are heading to space from U.S. soil for the first time in nine years aboard SpaceX’s Dragon capsule, the maiden crewed flight of the innovative spacecraft.

The mission, which is sending Doug Hurley and Bob Behnken to the International Space Station, is a bold new venture for the space agency’s plan to allow commercial companies to take its astronauts into low-Earth orbit.

The duo left a fiery plume behind at Kennedy Space Center’s pad 39A at 3:22 p.m. ET as they rode SpaceX’s Falcon 9 rocket toward a rendezvous with the station in about 19 hours time. On Wednesday, storms and a tornado warning upended a launch attempt, with the veteran space shuttle astronauts suited up and strapped into the Dragon before the mission was scrubbed.

Similar weather concerns dogged Saturday’s launch and nearly forced a second delay, but NASA and SpaceX decided early Saturday that conditions were trending in the right direction. As the countdown narrowed, the weather continued to improve.

Crew Dragon has separated from Falcon 9’s second stage and is on its way to the International Space Station with @Astro_Behnken and @AstroDoug! Autonomous docking at the @Space_Station will occur at ~10:30 a.m. EDT tomorrow, May 31 pic.twitter.com/bSZ6yZP2bD

The Falcon 9 booster separated and guided itself to a successful landing on a drone ship stationed in the Atlantic. Crew Dragon separated from the rocket at 3:35 p.m. ET and entered orbit.

“It was incredible. Appreciate the great ride to space,” Hurley told flight controllers as the spacecraft reached orbit.

The mission marks the first time NASA has sent astronauts into space since the end of the shuttle program in 2011, after it relied for nearly a decade on Russian Soyuz rockets to get them there. It is also a first for SpaceX, which has ambitions of someday taking paying customers zooming around the Earth.

“It’s incredible, the power, the technology,” said President Trump, who was at Kennedy Space Center in Florida for the launch.

Hurley, 53, and Behnken, 49 will put the bell-shaped Dragon through its paces on the way to the station. Dragon, which on the surface resembles an updated Apollo-era command module, sports a sleek interior and oversized touchscreen controls. It’s SpaceX Falcon 9 booster which has been used successfully dozens of times to put satellites and space-station cargo into orbit.

The Dragon-Falcon 9 configuration is a far cry from the winged space shuttle, but the SpaceX capsule has considerable safety advantages. Unlike the shuttle, it sits on top of the rocket, therefore avoiding debris that can fall off during launch — a problem that doomed the space shuttle Columbia in a 2003 launch. The position also makes it easy to eject the capsule if the rocket itself runs into trouble.

She twerked Nusret, her lover raided the place!

A woman dancing twerk to Nusret caught her lover

Bitcoin Looks Ready For A Movement Within 48 Hours!

Joaquin Phoenix and Rooney Mara are expecting their first child together

Confession of September 11 Attacks That Will Shake the World From...

Ten of WayV celebrates his birthday with much love and support...