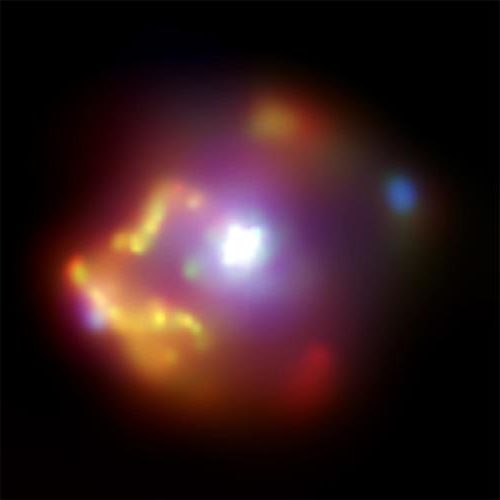 Images of the remains of the supernova, which was formed by the collapse of the star, located 160,000 light years from Earth, were shared by NASA.

NASA announced that the SNT 0540-69.3, which it shares its photograph, is approximately 160,000 light years away from Earth. SNT 0540-69.3 is located in the Large Magellanic Cloud, the galactic neighbor of the Milky Way. NASA explained that the remains of supernova emerged in the explosion that took place after a star collapsed under its own gravitational effect.

Supernova is an event that usually happens when a star reaches the end of its life cycle. As the star collapsed into itself, it collected around 16 kilometers of matter around it. The star then exploded by emitting shock waves that travel at a speed of about 8 million km / h.

NASA has announced that the SNT 0540-69.3 neutron star can be viewed as a bright white object in the middle of the photo. The neutron star, also known as Pulsar, is spinning fast and is at the center of a huge cloud of hot gases. NASA said that the gas cloud around the neutron star is 40 light years in diameter.

There are high energy particle clouds around the two star structure. However, while the gas cloud around SNT 0540-69.3 has a temperature of 50 million ° C, the clouds around the Crab Nebula are not so hot. Scientists at NASA say it may have been caused by environmental awareness.