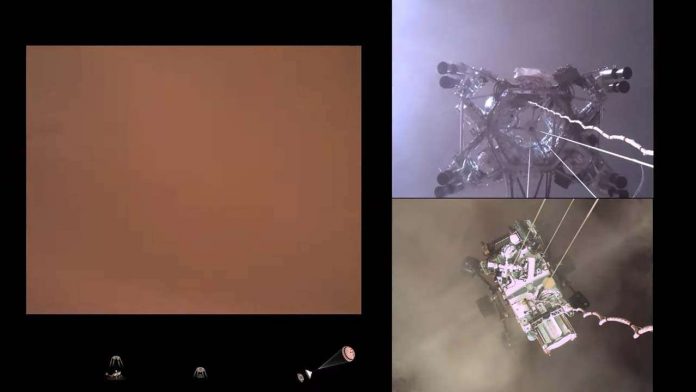 NASA shared images of the moments when the spacecraft named Perseverance landed on Mars. The images that feel like from a space movie show how the Mars explorer descends, how the first contact occurs, and how the module carrying the Perseverance is re-levitating.

The US National Aeronautics and Space Administration (NASA) continues to publish new images of the recent Mars mission. This time, the institution, which shared the images of the Mars explorer named Perseverance at the time of landing on the Red Planet, revealed with all its nakedness what happened at the most critical moments of the space mission, which has the potential to change the course of history.

The new images NASA shared are truly extraordinary. Because how Perseverance approached the Martian surface, how the contact took place, and how the vehicle that left Perseverance on the Martian surface rose again, is available in the shared images. Unfortunately, the sound was not recorded at the time of landing. However, NASA started to share the sounds it recorded on Mars after landing on Mars.

Here is an image from the shared video

NASA’s spacecraft, which will look for signs of life on Mars, has a structure with 6 cameras. All 3 of them were used for entry, descent and descent. The shared images reveal that these cameras work without any problems. Because in the images shared by NASA, there are images of both Perseverance and the Martian surface of the vehicle that acts as a parachute.

We can clearly state that the images we will share with you in a moment are as if they were taken from a space movie. Because you will first see the swing of the spacecraft approaching the Red Planet, and then how the module that landed Perseverance on Mars with the landing in the dust cloud flew away. If you wish, let’s leave you alone with those exquisite images.

Here are the moments when Perseverance landed on Mars