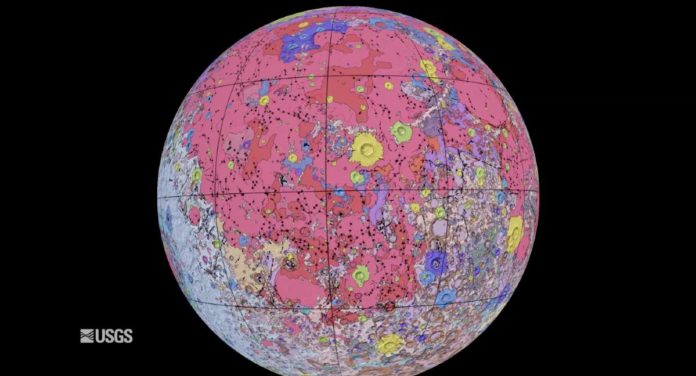 NASA and the U.S. Geological Survey Institute created the geological map of the Moon using decades of Lunar data. The created map will be used in future manned Moon missions.

NASA continues to prepare for new missions to be held for the Moon. The space agency, which wanted to send the first female astronaut to the Moon in 2024, also carried out a joint work to create the geological map of the Moon.

The U.S. Geological Research Institute and NASA’s Moon and Planet Institute have prepared a map that shows the Moon’s surface features in a striking detail. In the statement made by NASA, it was said that the map that was created will be a guide for future Moon missions.

The new map of the Moon will be introduced at the 51st Moon and Planetary Science Conference. The United Geological Map of the Moon, on which the surface of the Moon full of craters is shown in different colors, was prepared on a scale of 1: 5.000.000.

The moon’s surface, similar to a flowerpot, acts as a historical record of the Earth’s satellite. In the new map created, different colors are used to show the history of the Moon, and geological formations and time periods are distinguished.

The pinks of the Imbria period, which occurred about 3.5 billion years ago, dominate the New Moon map. During this period, the asteroids that hit the Moon enabled the craters we see today on the surface of the Moon.

Redmi K30i’s Camera Will Be 48 MP Revealed In MIUI System...