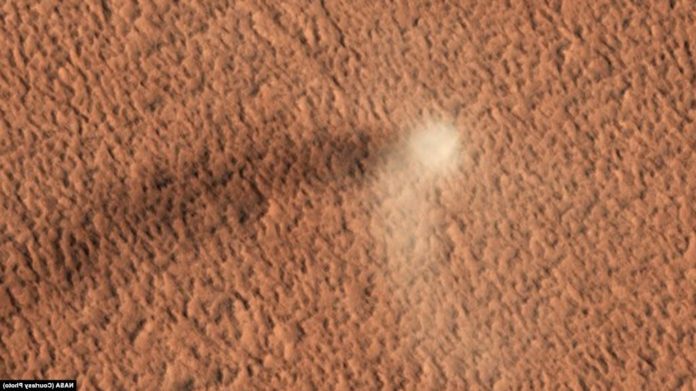 NASA has released a photo of a hose on Mars. The 70-meter-wide hose on the Red Planet, where hurricanes are widespread, is considered one of the usual events of the Mars climate.

Due to its atmosphere and climate, Mars is constantly exposed to climate events such as hurricanes and hoses. However, hurricanes taking place on Mars are very short, unlike Earth. So viewing hurricanes on Mars is a tough job. But in October 2019, NASA managed to take a picture of a huge hose.

The HiRISE team at the University of Arizona announced that the hose is 70 meters wide, and its height is up to 650 meters, out of the shadow. The hose displayed is a large hose for Mars, but not the largest. The planet’s climate suitable for hurricanes allows much larger hoses to form.

Using HiRISE, in March 2012 they viewed an active 20-kilometer-high hose that was mind-blowing. Although the hose displayed this time is not very big in height, it attracts attention with its width of 70 meters.

Claim: NASA Suggests to Send Japanese Astronauts to the Moon