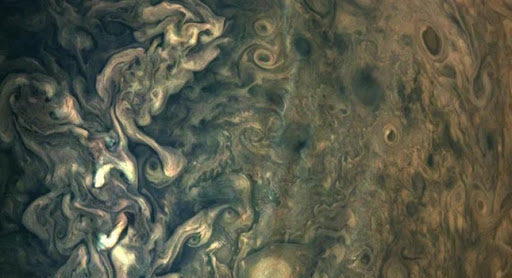 Jupiter’s new photo taken by NASA’s Juno spacecraft resembles Claude Monet’s paintings rather than a stormy and gaseous planet. The new image of the northern regions of Jupiter has excited both scientists and amateur astronomers.

Launched in 2011 and rotating around Jupiter every 53 days, NASA’s Juno spacecraft provides us with important information about this planet. The last image Juno has acquired may have excited scientists as well as art lovers because Jupiter looks more like Claude Monet’s landscape paintings than a planet in this image.

Seeing the raw footage captured by Juno on February 17, 2020, NASA ground control experts were eager to process these images and make them public. The scientist Gerald Eichstädt gave the final form to this cosmic work of art.

Thin, long currents
The northern areas of Jupiter, which are the subject of the image, are known for the boiling storms that rotate around each other like the smoke coming out of an incense stick. These violent storms, such as the Great Red Spot and antisyclones, are among the features that make the largest planet in the Solar System famous.

However, another feature that Jupiter fans are not familiar with can be seen in the new photo: long, thin currents piercing cloudy storms. The Juno spacecraft first discovered these currents during their first close flight in 2016. Scientists at NASA concluded that this is the layer of mist particles on the clouds in Jupiter, but they are not sure what these layers are made of and how they form in the planet’s atmosphere. Some experts think that these mist currents are caused by jet currents on both sides of the planet’s northern region.

Juno is programmed to make a total of 32 close flights around Jupiter. The final image, which looks like a work of art, was obtained from Juno’s 25th close flight. Juno flies from the top of Jupiter’s clouds at an altitude of 15,610 miles (approximately 25,121 kilometers). Juno’s tasks include measuring the planet’s atmosphere, mapping gravity and magnetic field, and exploring its magnetophers to better understand how the planet has evolved over time.

How to customize the background of your WhatsApp chats

Taking into account Philips’ complaint, US launches investigation into Fitbit and...