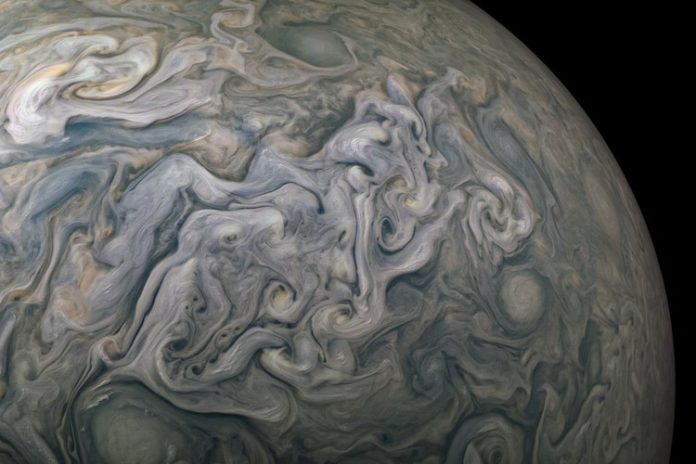 NASA, one of the space agencies working on space research, shared Jupiter’s photo resembling an art painting. The photo, on which a few minor plays were made, was taken by Juno, who has been orbiting the planet since 2016.

NASA is observing many different planets in our Solar System to make new discoveries about the universe. Of course, Jupiter, the largest of the Solar System, is among the planets observed by the space agency.

The spacecraft, which NASA calls Juno, has been in the orbit of the planet since July 2016. Juno, whose main task is to help scientists understand Jupiter’s origin, recently completed his 26th close flight to Jupiter, and during this flight he took quite impressive photos of Jupiter’s surface.

The original photo was taken by Juno on April 10, 2020, flying just above Jupiter’s clouds. According to NASA’s statement, Juno was 8,650 km above the cloud upper limit of the planet. In addition, the speed of the spacecraft was 204,000 km / h.

This photo of Jupiter also reveals the topography of the planet’s clouds. When the photograph is carefully examined, it is seen that there are relatively small, bright, pop-up clouds near the curved ends and above the clouds. On the other hand, the dark areas in the immediate vicinity show larger depths.

Leaving aside technical and scientific explanations, these photographs, which look like a work of art, are 21 MB in size. The space agency publishes RAW photos taken by JunoCam publicly. If you are looking for a new background image for your computer or phone, you can check the photos taken by Juno here or download the image in our news here.

Scientists Examine Scientific Bases in the Background of Figure Skating