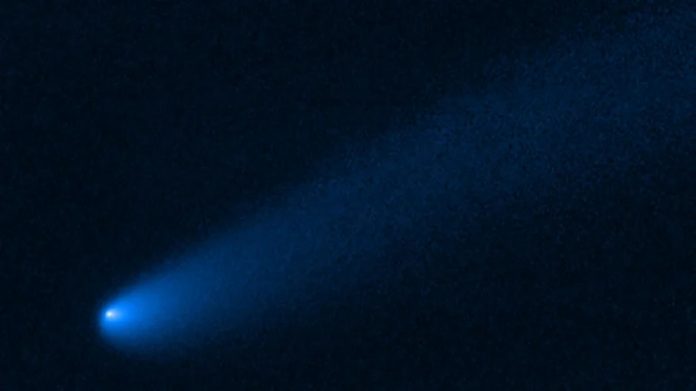 NASA’s Hubble Space Telescope imaged a comet near Trojan, the ancient asteroid belt orbiting Jupiter. This observation of Hubble is the first comet to be seen in the region.
Hubble, which has been our eyes and ears in space since it took its place in low Earth orbit in 1990, continues to deliver new news to us. Due to its location outside the atmosphere, Hubble has a much more important place than all other telescopes on our planet, especially with the photographs it transmits, providing important data for scientific research and allowing us to closely monitor space.

Jupiter alters its orbits by interfering with comets that enter its orbit:

This image, captured by Hubble, also helps scientists understand Jupiter’s influence field in its orbit and its effects on comet-like objects. It is thought that this young comet orbited Jupiter about two years ago and approached the planet, then pushed the comet towards Trojan asteroids by the gravitational effect of Jupiter.

Carey Lisse from the Johns Hopkins University Applied Physics Laboratory stated that this is what really excites Hubble’s data and said: ‘The great thing is that we actually launch this object and change its orbital behavior and catch Jupiter, which brought it to the inner system. Jupiter is literally controlling what is happening by changing their orbits after comets enter the inner system. ‘ He spoke in the form.

A New System Has Been Designed That Can Destroy Dangerous Asteroids...