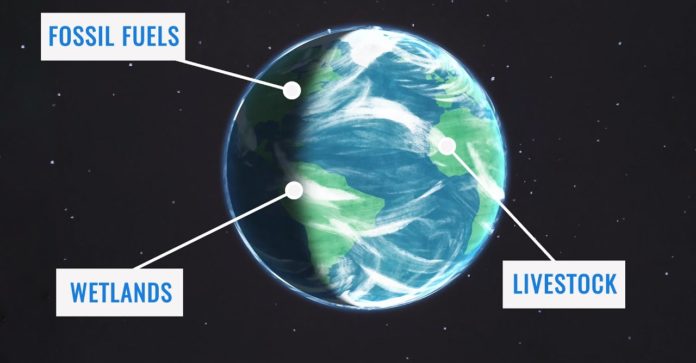 Scientists work in different fields to track climate change and global warming. Scientists from NASA also created a 3D map showing the amount of methane gas on Earth and its movement in the atmosphere, which is known to have an impact on global warming.

Methane; It is a greenhouse gas emitted from industrial facilities, farmland, oil facilities, irrigation areas and water bodies. Scientists from NASA say that methane gas is at least as effective as carbon. For this reason, NASA created a 3D map showing the movements of methane gas in the atmosphere.

Abhishek Chatterjee, a carbon cycle scientist at NASA’s Goddard Space Flight Center, says that methane concentration has increased faster than before, as a result of long-running human activities, similar to carbon dioxide. Chatterjee says that methane emissions will increase as long as the human population continues to grow and changes are not made in the areas of energy use, agriculture and livestock.

Due to the negative impact of methane emission on climate change, the scientific world is in dire need of a complete picture of how methane emissions evolve and how it contributes to global warming.

Scientists from NASA announced that the methane emission has increased more than almost twice since the Industrial Revolution. Scientists say that increased methane gas is much more effective than carbon dioxide in capturing heat. According to NASA, 20 to 30 percent of the world’s temperature rise was due to methane gas emissions.

Underlining this effect of methane gas emissions on climate change, scientists from NASA created a 3D map using the data they received from satellites and the country’s methane emission data. The data were used in a computer model that calculates the emission of methane from natural sources such as wetlands and simulates the movements of methane in the atmosphere. Researchers have also developed an air model to see how the winds move the methane gas sum after revealing the methane emission model.

Testing will be started on volunteers for coronavirus vaccine

We Can See Robot Animals Instead Of Cars Fighting In The...

According to NASA, Our Houses on the Moon and Mars Can...

RM is still exceeding and revealed own current studies

Phosphorus, a key part of DNA, may have come to Earth...