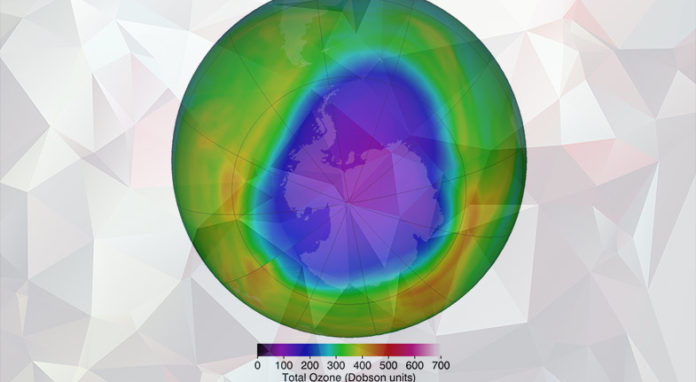 Scientists from NASA shared the results of the research on the ozone layer on the North Pole. Accordingly, the ozone dilution in the region in question fell to a record level in March, dropping to 205 Dobson units.

An extraordinary openness was observed during the observations made over the North Pole this year in the ozone layer formed above Antarctica, which is surrounded by huge oceans every year. Scientists who announced in the past days announced that they recorded a strong decrease in the ozone hole on the Arctic.

According to the latest information from the U.S. National Aeronautics and Space Administration (NASA), the ozone depletion on the Arctic fell sharply in March. Analysis of the data obtained from satellite observations reported that ozone levels dropped to 205 Dobson units on March 12, experiencing the lowest decline. The Dobson unit is known as the unit of measure of trace gas in a vertical column throughout the Earth’s atmosphere.

The ozone level on the Arctic fell to 205 Dobson units in March:
Although such low levels are rare, it is unprecedented. Similar low ozone levels occurred in the stratosphere in 1997 and 2011. By comparison, the lowest ozone value for March in the Arctic was around 240 Dobson units. “This year’s low Arctic ozone happens every ten years,” says scientist Paul Newman from NASA’s Goddard Space Flight Center. He added: “This is important for the health of the ozone layer, as the polar and ozone levels are typically high in March and April.”

As we know, Ozone is a colorless gas with its molecules consisting of 3 oxygen atoms and is located in the upper layers of the atmosphere. The ozone layer is known as a gas layer that acts as a natural shield that protects life on earth from the harmful ultraviolet radiation of the Sun. Harmful ultraviolet radiation causes problems in skin cancer and cataracts and other environmental issues.

Similar ozone levels occurred in 1997 and 2011:
The reduction of the Arctic ozone layer in March was caused by a combination of factors caused by an unusually weak upper atmospheric wave events from December to March. These waves direct air movements along the upper atmosphere, similar to the air systems we experience in the lower atmosphere.

Stating that they do not know the factors leading to weak air dynamics this year, Paul Newman said, “But we know that if we did not stop transmitting chlorofluorocarbons to the atmosphere due to the Montreal Protocol, the dilution at the Arctic this year would be much worse.” He spoke in the form. Since 2000, levels of chlorofluorocarbons and other man-made ozone-depleting substances in the atmosphere have decreased significantly, and this continues.

Astronomers Think One of the Important Mysteries of the Universe Has...

A Complete Lion Mummy Was Found for the First Time in...