Home Entertainment Namor’s First look at the MCU Secretly Confirms that he is As... 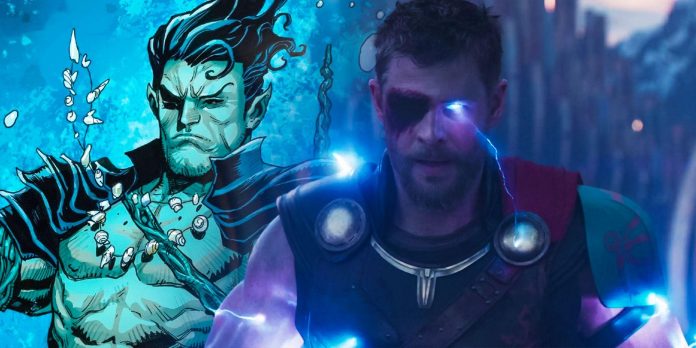 The first look at Black Panther: Wakanda Forever’s Namor the Sub-Mariner secretly confirms he’s in the same league as Thor in the MCU. Leaked merchandise for the upcoming Phase 4 movie has piled on to the evidence for the long-circulating rumors of Namor’s impending arrival in the MCU. Not only that, but they also show off the MCU’s interpretation of his iconic comic design.

Marvel still hasn’t confirmed it officially, but it’s hardly a secret anymore that Mexican actor Tenoch Huerta has been tapped to bring The Savage Sub-Mariner to life on the big screen in Ryan Coogler’s eagerly anticipated Black Panther sequel. In Marvel Comics, Namor is a classic anti-hero and a character with an old and bitter rivalry with Black Panther. A tease in Avengers: Endgame hinted at some version of their history being carried over to the MCU, and it’s become increasingly apparent that this is indeed the case for Marvel’s Namor plans. Namor has the potential to lead his own movie, help make up the roster of The Avengers 5, or join a new version of the Defenders, but it seems before any of those things happen, he’ll be a part of Wakanda’s next story first.

Related: All 11 Marvel Movies Releasing After Thor: Love & Thunder (& When)

It’s hard to say what Marvel has in store for Black Panther 2, but a war between Wakanda and Namor’s people appears to be on the horizon. Interestingly, though, Wakanda’s conflict may not be with Atlantis, per se, but instead with an entirely different civilization. So far, it looks like Marvel is making some substantial changes to Namor’s origin. Here’s what could be, how his MCU look reinforces this theory, and how his design is a sign that Namor is as powerful as Thor in the MCU.

Namor’s new look retains his trademark ankle wings, pointed ears, and green trunks, but still differs greatly from his iconic design in Marvel Comics. For the most part, the differences can be attributed to his new costume’s Mayan influences. Namor’s jewelry and armor ties him directly to the culture of the ancient Mayans. Since Atlantis (if it exists) wouldn’t have any link to the Mayan civilization, there’s a sense that Marvel has decided to reimagine Namor’s underwater kingdom as a lost Mayan city and ditch Atlantis altogether. How that could work could be explained by the theory that Namor is a member of the Mayan pantheon in the MCU.

Moon Knight and Thor: Love and Thunder prove that multiple different pantheons exist as real characters in the MCU. In Marvel Comics, the Mayan gods are one of several groups of deities who populate the Marvel Universe. For the MCU incarnations of these characters, they could easily be replaced with Namor the Sub-Mariner and the supporting characters from his comics. If so, that could provide an explanation for exactly who these characters are while also linking them to the past (just as Atlantis would have done). It could be that Mayan mythology was inspired by Namor’s people, who could have been seen by the Mayans centuries ago and worshipped by them as gods. If that’s true, major characters from Namor comics, such as the Sub-Mariner himself, Lady Dorma, Attuma, Warlord Krang, and Byrrah could all be MCU versions of certain gods from Mayan mythology.

If Marvel keeps Namor’s powers from the comics, taking this route would give Marvel an adequate explanation for his insanely high power level. In the source material, he isn’t anything close to a god in terms of his origin. He possesses remarkable longevity, but he isn’t immortal in the same way that Thor and Hercules are. That being said, he’s still a top-tier character in regards to where he stands on the power scale. In Marvel Comics, he’s made short work of Wolverine, Spider-Man, Captain America, Daredevil, and more. Typically, it takes a powerhouse to oppose him physically, and more often than not, even that isn’t enough. With Namor’s strength and ruthlessness, he’s been able to engage in epic slugfests with some of the strongest characters in Marvel’s library. Thor, Hercules, and Hulk have all struggled mightily when pitted against him. Hulk in particular has even been beaten by Namor when fighting the Sub-Mariner underwater. Namor is strong no matter what the circumstances are, but his power is at its peak when he’s wet or in the water.

The Mayan link in Namor’s MCU design increases the possibilities of Black Panther 2 providing a comic-accurate take on his power level. If he’s a Mayan god in the MCU, it would make perfect sense for him to have his comic book counterpart’s immense strength, durability, and longevity. If he was just a mutant member of a superhuman off-shoot of humanity, it might be harder to imagine Namor as a character worthy of being put in the same class as Thor and Captain Marvel. All things considered, it’s likely that Namor – in the same vein as the character from the comics – has what it takes to give Thor all he could handle if they were to ever come to blows in a future MCU movie.

Black Panther: Wakanda Forever using a Thor-level Marvel character as its villain creates a scenario with frightening implications for the movie’s heroes. In the comics, Black Panther wasn’t a physical match for Namor, and the same is sure to hold true for the characters expected to be on hand when Namor makes his big-screen debut. Even if Okoye, Nakia, M’Baku, and Shuri all team up, they’d still be at a severe disadvantage. Winston Duke’s M’Baku has some degree of super strength, but it can’t compare to what the Sub-Mariner can do even when he’s in a weakened state. The rest aren’t superhuman and wouldn’t be capable of holding up to his blows.

By including Ironheart, Black Panther 2 has given the heroes a potentially useful weapon against Namor that they wouldn’t otherwise have, but advanced Iron Man-like technology won’t suffice either. Presumably, Riri Williams will be an inexperienced teenage superhero and a long way from being the next Iron Man, a hero who has lost to Namor on multiple occasions in Marvel Comics. To overpower someone like Namor, Black Panther 2’s heroes will need greater numbers and firepower than what the movie’s cast currently boasts. That’s why it may take clever tactics, such as keeping him out of the water and relying on their vibranium weaponry, to gain an edge over Black Panther: Wakanda Forever’s villain.

Shang-Chi: New Piece Exclusively With The Protagonists, How Much Do You...