Home Entertainment Naked Tuesday Review: In an Entertaining Comedy, Everything Gets Funny and Weird... 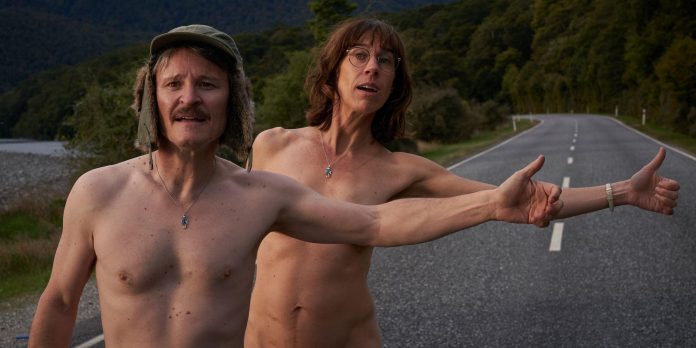 There is something to like about Naked Tuesday. It’s really funny, weird and sometimes informative. But perhaps the most interesting thing about the film, shot by Armagan Ballantyne from a script by Jackie van Beek, who also plays the main role, is that it consists entirely of gibberish. Naked Tuesday is incredibly interesting, and although the central premise begins to weaken after a while, the story returns as it nears the end.

The action of the film “Naked Tuesday” takes place on the fictional island of Zebftoni. It tells the story of Laura (Van Beek) and her husband Bruno (Damon Herriman), an unhappy couple whose marriage has long been irrelevant. It’s obvious from the start that there is a distance between them; Laura avoids (and gets frustrated with) Bruno, while he tries too hard somehow to keep the spark with all the fake fun of a man who is made to look happy. Simply put, they are unhappy, their marriage only works because it is more or less on autopilot. For their anniversary dinner, Bruno’s mother gives them a paid trip to a New age couples retreat, led by the always excited Bjorg (Jemaine Clement). Trying to save their marriage, Laura and Bruno drive up to a shelter that, despite their initial hesitation, allows them to finally face some of their problems.

“Naked Tuesday” is different from most movies about couples retreats or any traditional romcoms, for that matter. There are no love pigeon situations or moments that seem insincere in relation to the established (and prickly) relationship of Laura and Bruno. Moreover, the finale does not bring them together, despite conversations and realizations on both fronts, undermining expectations of a quick retreat, which is usually intended to solve their family problems. It’s funny, but the movie is subtitled, but it’s easy to follow — namely, because it’s in gibberish, so it doesn’t really matter, and also because the actors are very expressive in their body language and faces. Laura and Bruno’s relationship is strained, and the retreat makes them both better and worse.

The presence of Bjorg only complicates the situation, and Clement is perfect for the role of a sex guru. Van Beek and Herriman shine as an expressive and intensely frustrated couple unifying the film as they move from one crazy moment to the next. All this suggests that “Naked Tuesday” is a little delayed halfway through, content with the fact that most of the conversations are said by crazy machinations. But the unconventional methods and surprises of the retreat can only continue until they begin to tire the audience. For a while, it seems like the movie gets stuck a bit and the tempo resets before resuming again.

Nevertheless, the events at the retreat lead to a solid finale, which includes the titular “Naked Tuesday” and everything related to it. Despite the midway slump, Ballantine’s film is a good time. The actor’s comedic moment is great, and what he does is comical and absurd. Viewers will see the moments of looseness, the awkwardness that Laura and Bruno experience at first, before finally letting go of their own doubts and feelings that they kept so close in their hearts. Ultimately, Naked Tuesday is a fascinating, interesting film that experiments with fake language while keeping the characters’ emotions as real (and silly) as possible.

Why CSI: Vegas Season 2 Will Be More like the Original...