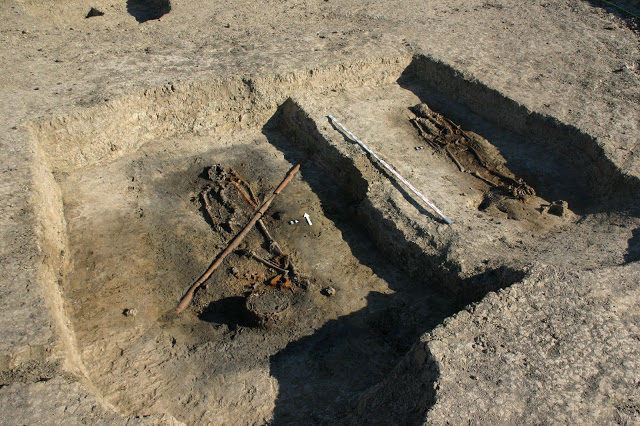 Four warrior graves were found in archaeological excavations in Poland. The tombs in the medieval room are thought to belong to an elite group of soldiers. For many civilizations in the Middle Ages, soldiers were among the upper class people.

Four mysterious tombs discovered in Poland reveal the secrets of medieval warriors. According to researchers, the 11th-century tombs were found in a cemetery in the village of Ciepłe in northern Poland. Analyzing the remains and items buried with soldiers, experts discovered that the warriors were of Scandinavian origin.

Dr. from the Gdańsk Archeology Museum. “There were four very richly equipped graves in the middle of the cemetery. They were probably warriors, given the guns and riding equipment found next to their bodies,” Sławomir Wadyl said. According to Wadyl, those buried in the central part of the cemetery represented the elites in social life, as evidenced by the structure of their tombs and equipment.

Chamber tombs in Poland
The equipment probably belonged to a group of elite riders, but their role was probably not fighting. Archaeologists found equestrian equipment such as spurs and stirrups, as well as elite-like swords and spears in the graves. Also included among the chamber tombs were coins, metal and wooden utensils, weight scales, combs, knives and metal ornaments.

Dr. Due to the weight scales found in two of the graves, Wadyl believes that men might have collected taxes for the Polish local government at that time. It also points out that such chamber tombs are frequently found in Scandinavia and Eastern Europe.

Medieval discoveries made in Poland have attracted attention recently. Researchers recently found a medieval shipwreck on the Vistula River. The ship, about 37 meters long and 6 meters wide, was found at the tip of the river in the north of Warsaw. On the other hand, two Viking boat wrecks in the Baltic Sea in Scandinavia were among the most intriguing discoveries for Norway.