Home World Mysterious gas cloud that appeared in Africa and killed 1,746 people and... 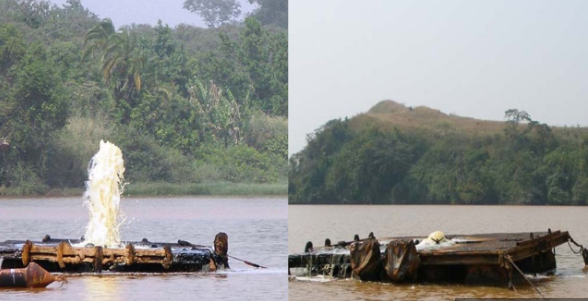 On August 21, 1986, a terrible explosion occurred in Africa, which the natives could not even imagine. So what was the mystery of this explosion?

An explosion in the African country of Cameroon on Lake Nyos claimed the lives of thousands of people and animals. In the first days of the incident, although people could not come to a consensus about the cause of this explosion, the cause became known much later.

The explosion caused a sudden release of 100,000-300,000 tons (according to some sources, 1.6 million tons) of carbon dioxide (CO2). For this reason, the large gas cloud that appeared officially created a catastrophe in the lake area. Then let’s look at the history of this event together.

A cloud of gas that initially rose 100 kilometers, then descended, becoming heavier than air.

Some archaeologists believed that this gas cloud could have formed due to a landslide.

Some also suspected an earthquake, but villagers said they did not feel any tremors on the morning of the event. So this possibility was dropped. After all, experts finally agreed that it was caused by a volcanic eruption. Because the people who came to the region to explore found that the gas in the water sample taken from the lake contained carbon dioxide containing methane and helium, which was important evidence that the explosion was of volcanic origin.

When the iron-rich waters from the depths of the lake came to the surface and combined with oxygen (oxidized), the resulting gas turned the lake red, as you can see in the picture above. Interestingly, after there was a problem with the gas, the water level in the lake dropped by about 1 meter, and all the trees near the lake suddenly began to fall. There are even claims that about 1.2 meters of gas was released. However, surprisingly, the gas did not damage any houses in the village.

Scientists said that a 100-meter layer of water and foam formed on the surface of the lake, creating a large gas cloud at least 25 meters high that reached the shore. This natural phenomenon is enough to cause damage to settlements near the lake. In addition, the carbon dioxide formed due to this layer formed in the water was 1.5 times higher than the density of air in the atmosphere. People living in villages such as Nyos, Kam, Subum and Cha in this region said that because of this cloud, it seemed to them that they were drowning even in their sleep. In fact, the gas cloud was so interesting that it had a mass of 50 meters and could move at a speed of 20-50 kilometers per hour. According to published data, this violent cloud, which is officially the cause of nightmares, killed 1,746 people and 3,500 animals.

About 4,000 people left their village and fled after the incident.

Think about it, even those who fled the region began to suffer from various diseases, such as breathing problems and paralysis caused by the gas cloud. Some survivors said they could smell rotten eggs in the village, which authorities believe indicates the presence of other volcanic gases mixed with carbon dioxide. However, since the only gas found in the lake water in the first place was carbon dioxide, the main cause of the incident was attributed to him. But this was, of course, an erroneous assumption, because, as we mentioned at the beginning, the main source of the problem were volcanoes that continued to boil underground.

Michelle Tuttle, who works for the US Geological Survey, said that 1200 people live in the village of Nyos and only 4 people survived this event. In other words, the death rate of 1,700 people is a figure derived from the total number of people who died in other villages. As you can see, it’s really creepy that the number of survivors did not exceed the fingers of one hand. Moreover, experts said that in fact about 3,000 people could have died, but the real figure was hidden because the bodies were buried so as not to spread the disease in the region.

The survivors of the explosion were treated at a hospital in Yaounde, the capital of the country. Initially, it was believed that these people were poisoned with sulfur and hydrogen, but later interviews and studies of survivors showed that the main cause of poisoning was carbon dioxide. The living said that the dead quickly lost consciousness and died. In fact, while the scientists were examining the village, there was a gas release again, but since they were on the slope above the lake, nothing happened to them.

Since the source of the problem was volcanic lava underground, it was only a matter of time before an eruption would occur again. For this reason, a degassing device was installed in the lake.

Various studies in this direction have been conducted since 1995, and in 2001 a gas mask tube could be placed in the lake. Then in 2011 another pipe was laid there, and in 2019 it was possible to build a quite solid gas purification system. The purpose of these installed degassing pipes was to keep carbon dioxide at a safe level, which was successful. Thus, people’s lives in the region are now protected from gas and carbon dioxide emissions.

After this event, scientists began to explore different places, as they feared that the same event could happen again in the region. Fortunately, there is no dangerous situation in the area yet. However, experts say that it is necessary to be wary of volcanic eruptions, which can occur not only in Africa, but also in different parts of the world, for example, in Naples. So, what do you think about this event? How do you feel when such frightening events occur for natural reasons? You can share the answers to these questions with us in the comments.

‘Pink’ Supermoon: Check Out Photos of The Phenomenon Around The World