Home Entertainment My Hero Academy: Who is Mei Hatsune? 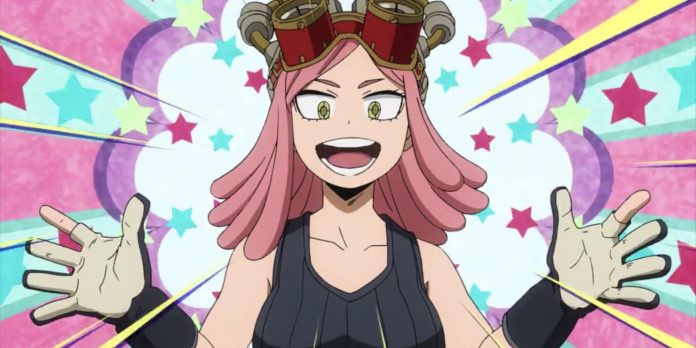 Mei Hatsume is a quirky student in the Support Course in U.A. High School in the anime My Hero Academia. While she’s only made a few appearances in the anime thus far, she’s quite the important character. Her inventions help other characters, such Izuku Midoriya, the main protagonist. Mei is a supporting character who creates the quirkiest, most efficient support items. When it comes to support characters, Mei Hatsume takes the mechanical cake.

RELATED: Did My Hero Academia Just Kill Off One of its Most Popular Characters?

My Hero Academia has briefly covered the courses students can pursue so far. In U.A. High School, there are three courses that students can pursue: Hero, General, and Support. The Hero Course students train to be future pro heroes. The General Course is full of general education students.

Most of them don’t want to become pro heroes, but they can transfer into the Hero Course like Hitoshi Shinsou in Season 5. The Support Course is where it’s at for Mei Hatsume. Support Course students make support items and learn how to support the future pro heroes.

Her personality is refreshing in the sense that she’s something of a comedy relief character, but she also has a personality rather than being a one-note trope. She does somewhat fall into the trope of the grimy mechanic, or “wrench wench,” as she’s typically seen with oil on her face and holding a wrench. This is incredibly reminiscent of Winry Rockbell from Full Metal Alchemist, who also falls into the same trope. Explosions are commonplace in the Support Department with her around because she experiments so much. Hatsume’s need to invent good support items gets praise from the main Support Course teacher, Power Loader, who tends to collaborate with her. Many other students are put off or even scared by Hatsume’s forward and hyper personality despite how much help she is.

While a lot of her personality revolves around her inventions, other parts can be seen throughout the series. Hatsume is incredibly outgoing and isn’t afraid to get up close and personal with other characters. She tends to be a “straight to the point” kind of girl. She only ever seems to have inventions on her mind, even in fan service scenes like the one where she falls on top of Deku in Season 3, episode 14. In a classic anime scene such as this, typically the girl is seen slapping the guy even if she was the one at fault. Hatsume, on the other hand, cares not for what position she’s in, and starts rambling about her ideas, curious as to why Deku is visiting the U.A. Support Department.

She only seems to care about her inventions being useful and getting the spotlight. She even refers to her inventions as her “babies” throughout the series. In the recent season 5 OVA “Laugh as if You are in Hell” she’s seen using her inventor genius to create a robot that might be able to help with the mission. Unfortunately, her robot malfunctions due to the antagonist’s quirk, and she gets rightfully sad about it. Hatsume seems to view her inventions more as pets or works of art rather than simple machines. Her motivation comes from her need to invent rather than money even though she is keen on getting a lot of investors.

What Does Hatsume Do?

Hatsume makes a bunch of the Hero Course students’ support items and equipment. Most notably, she was the main person to revamp Deku’s equipment when he needed to reinforce his arms and legs. Originally, she suggested a prototype suit that looked something like a mech outfit without a head, but Deku suggested it was a bit too bulky.

Hatsume agreed and redesigned the idea quickly and efficiently. With some input from Deku, she designed his Iron Armor Soles and Air Force Gloves. She brings Deku his Airforce Gloves practically the next day with obviously tired eyes but an excited attitude. It is her engineering expertise that keep Deku from completely destroying his body.

Does Hatsume Have a Quirk?

Some viewers may forget that Mei has a quirk, since it isn’t super obvious. Her quirk is a mutant type, meaning it’s part of her body. Other characters with a mutant type are Class 1-A’s Fumikage Tokoyami and the League of Villains’ Spinner. While her quirk is less visible than the others it still falls under the same category due to the fact that it changes her irises. This also means that her quirk is something she can’t turn off.

The name of her quirk is Zoom and it makes it so she can focus on something up to five miles away. Typically, she is seen using it to find investors for her support equipment. This can be seen in her hilarious “fight” with Iida during the U.A. Sports Festival in Season 2, episode 8 when she zooms in on the investor stand to see them talking about her potential. The downside of her quirk is that she can’t hear anything with it, only see things. Had Mei Hatsume pursued being a regular Pro Hero, she would have fantastic scouting potential similar to that of Kyouka Jirou.

Relationships with Other Characters

Since My Hero Academia has a million and one characters, it’s hard for Hatsume to interact with all of them. She’s mostly seen with Deku, Iida, and sometimes Uraraka. Hatsume’s relationship with Deku is the most developed as they’ve had the most screen time together. During certain episodes, Deku can be seen geeking out with Hatsume about support items. If Deku had remained quirkless his whole life, there is a chance he might have ended up in the Support Course with Hatsume. They make a great team and despite Deku being in the Hero course, they can bounce ideas off each other.

Iida is mainly seen interacting with her in the U.A. Sports Festival, where he agrees to wear her support items. Their relationship starts off rocky, however, when it’s revealed that Hatsume was simply using Iida as a guinea pig to show off her inventions to potential investors. The scene where she uses Iida to show off really exemplifies her one track mind when it comes to her inventions. It also exemplifies her laid-back attitude about how other people think of her. Iida actually refers to her as a “scoundrel” for tricking him, but she shrugs it off.

Despite her scene where she tricks Iida, she’s an incredibly kind-hearted character. While her dedication to support equipment shows how manic she gets about engineering, it also shows how dedicated she is to helping people. Hatsume is hardworking and wants to help the Pro Heroes by being heroic in a different way. She believes that “inventing stuff is how the support course does heroics” and explains this to Deku in the manga.

Season 6 of My Hero Academia will air in the Fall of 2022. In the meantime, fans can watch the two new OVAs over on Crunchyroll and see how cool Mei Hatsume’s inventions are.