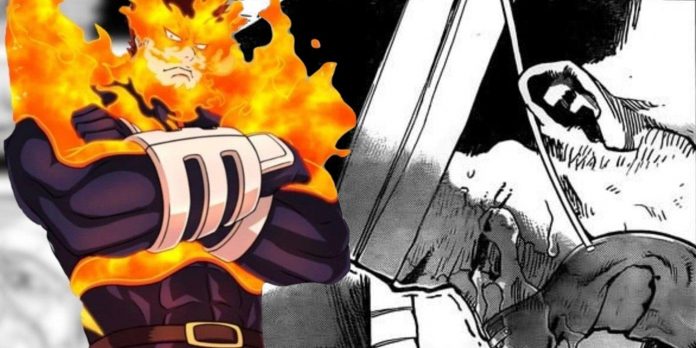 Warning! There are spoilers ahead for chapter 355 of “My Hero Academy”!

Endeavour has somehow become even more vulnerable than he was during his lowest moment at My Hero Academy. This really says something, as the previous low point in question is arguably one of the most emotional scenes in the entire series.

The torment to which Endeavour subjected his entire family is one of the main storylines of My Hero Academia. From the very beginning of the series, it was clear that Shoto Todoroki shared a great hostility towards his father, completely refusing to use the part of his quirk that he inherited from his father as a result. Later, readers found out why and how Endeavour’s actions affected everyone in the Todoroki family, including Shoto’s older brother Toya, who eventually became Dabi. Despite this, Endeavour always remained restrained, even when he finally decided to make amends. So, when Endeavour finally broke down and cried in front of Shoto, both readers (and Shoto himself) were rightly shocked and probably still shocked. Never before had anyone seen Endeavour so vulnerable.

But now just a few panels in chapter 355 of My Hero Academia miraculously complement this key point. By the beginning of the scene, Endeavour had already heard that Shoto had defeated Dabi. Endeavour’s opponent, All for One, capitalizing on how this news clearly affects Endeavour, begins to mock hero number one until he finds a loophole and severely injures Endeavour. At the beginning of chapter 355, hero number one lies in agony because of this wound, and soon his thoughts turn to his sons as he calls out to them in his mind, desperately hoping that they are all right.

This moment is important for many reasons, but mainly because for the first time Endeavour calls Dabi by the name “Toyah” and affectionately addresses him. Although Endeavour has known the truth about Dabi’s identity since the Paranormal Liberation War, he has been hiding his real feelings until now. The act of turning to him in despair only confirms how he feels about Toya, which is further aggravated by the horror of the situation. On top of that, fans were waiting to see how much Endeavour was affected by Dabi and Shoto fighting each other. Even though the idea of fighting is Shoto’s idea, Endeavour still lets him do it, even though it’s his own fault that Dabi ever became a villain. It is inherently unpleasant to let your children fight each other to the death. To see Endeavour suffer because of his painful decision is heartbreaking for readers and only aggravates the overall unenviable situation in which Endeavour is now.

What makes this moment much lower for Endeavour than when he originally shouted his eyes at Shoto many chapters ago is the fact that Endeavour is currently unable to express his feelings to his sons even if he wanted to. The ability to apologize to the person you have offended (especially to a child), or to relieve yourself of a burden, is incredibly cathartic. And now Endeavour can’t experience it, and this fact causes a powerful reaction from fans. However, the official translation of the manga minimizes this overall effect compared to how the scene was translated by fans. In Shonen Jump Endeavour refers only to Shoto and Toya as such and as “both”. But in the fan translation, he calls them “my boys…” There is no more personal or more emotional way for parents to address their sons than this. But one thing is for sure: this moment with Endeavour is a real scene, no matter what translation My Hero Academia fans read.

Call of Duty: Vanguard to Host A Free Multiplayer Weekend in...