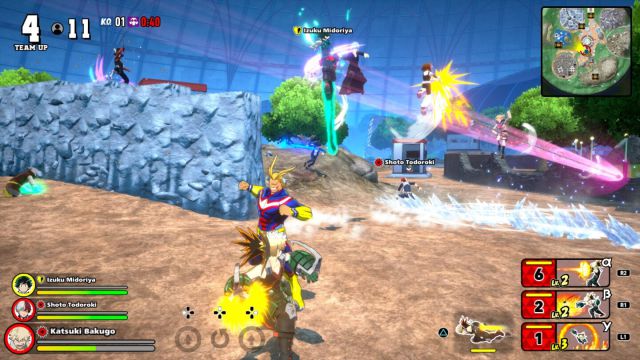 My Hero Academia: First look at the new free-to-play based on the popular manganime MHA, which is taking the world by storm. Confirmed dates of its closed beta in Japan. Bandai Namco Entertainment has released the first official gameplay trailer for the recently announced My Hero Academia: Ultra Rumble, a new free-to-play battle royale video game based on the popular Shonen Jump manganime. With the premise of offering high doses of action in games based on survival, the game will have a closed beta for PS4 only in Japan this February.

As explained by the Japanese publisher, users who have a PlayStation 4 in Japan can now register for the closed beta that will take place between February 2 and 6. The deadline to sign up for this closed beta is next January 28 at 6:00 p.m. local Japanese time.

Battle royale games for up to 24 players with unique abilities

Regarding the content of the beta, which is still a preview of what we will find in the final video game, which is still a multiplayer title, it will offer a total of 12 selectable characters: Izuku Midoriya, Katsuki Bakugo, Ochaco Uraraka , Shoto Todoroki, Tsuyu Asui, Cementoss, All Might, Mt. Lady, Tomura Shigaraki, Dabi, Himiko Toga and Mr. Compress. My Hero Academia: Ultra Rumble matches will be 24 players in the final version of the game.

Also, each character has their own two, their unique special ability in defense, attack, support values, etc. In the scenarios there will be scattered different Skill Cards, essential to be able to vary the abilities and skills of each character throughout the game.