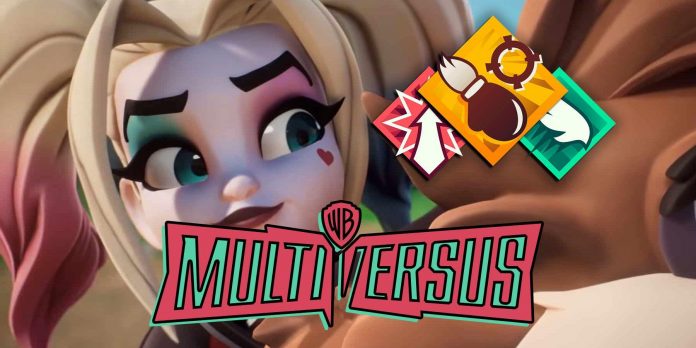 Harley Quinn is arguably one of the most played characters in the absurdly popular game, MultiVersus. She’s one of this platform fighter’s Assassin-type characters and has some incredibly satisfying moves that lead to many easy-to-execute combos. And in the beginning, a lot of people thought she was overpowered. But, compared to some characters in need of nerfs, it’s obvious that she’s not.

Still, many Harley mains are finding themselves against a wall in terms of their MMR as they start to get matched against better and better opponents, especially in the 1v1 mode. So, here are some of the best Perks to use on Harley Quinn in MultiVersus that just might be enough to help bridge that gap.

First up, let’s just say her Perk setup right away and go from there. The best perk loadout for Harley Quinn is:

Now, this guide will go into why each of the Perks is best to run individually, but let’s talk about her Signature Perk, Glove Control, and her only Defensive Perk, Slippery Customer, first.

Harley is one of the few characters who actually has three different Signature Perks to pick from at level 15+, and these are Glove Control, Smooth Moves, and Confetti Explosion. But why is Glove Control the best of the three? Well, Smooth Moves is useful in that it adds some invincibility frames to Harley’s Prank Shots, allowing her to evade easier, which is important for an Assassin. But, top players don’t use her Prank Shots all that often, and the difference it makes isn’t game-changing.

Next, Confetti Explosion, while it reads as something incredibly powerful, it’s actually the opposite. The explosion created at Max Confetti Stacks with Confetti Explosion actually replaces the Ignite effect this passive has by default, which is what Harley players usually rely on to inflict tons of passive damage on their opponents throughout the match.

So, all that leaves is Glove Control, which allows her to aim her Boxing Ringer more precisely, leading to better coverage and easier spikes. It’s simple, but this small modification to this move actually completely changes how Harley approaches some disadvantageous circumstances.

For her first “minor” Perk, it’s a Defense-type Perk, and not one many would likely expect Harley Quinn to run, Slippery Customer. But, a lot of people tend to forget that Harley is an Assassin, which means she deals 14 percent more damage overall but also takes 14 percent more from opponents.

On top of that, Ms. Quinzel is one of the lighter characters in the game, meaning she can get knocked into the Blast Zone in the high 40s or 50s, depending on the situation. So, running Slippery Customer allows her to dodge through attacks a bit more easily and lets Harley mains play aggressively while also being able to avoid unnecessary damage.

Hit ‘Em While They’re Down

Harley’s Passive Ability, AKA Confetti Time, essentially gives her a constant That’s Flammable Doc Perk without taking up one of the three (technically four) Perk slots. To elaborate, a large number of Harley’s moves apply this “Confetti” Debuff, and when they’re hit with this applied, they become Ignited.

And, many of the best Harley players tend to keep their opponent Ignited or, at the very least, wary of their Confetti Stacks most of the game. So, running a Perk that capitalizes on this constant Debuffed state is obvious, especially if Harley is in teams with another Debuff-centric character like Batman, Velma, and so on.

Anyone who has played Ms. Quinn even a few times is well aware of how “Vertica”l her moveset is, given that she’s described in-game as a Vertical Assassin. Just to name a few of the Attacks/Specials that launch players vertically, there are:

Jerk-In-The-Box Batter Up! The explosion from triggering Stuffie Bat Confetti Grenade Heads Up! And the last hit of Clown Combo

It’s safe to say that a majority of her kit overall is focused on knocking players up Vertically and/or KO’ing them from the top Blast Zone. So, this Perk is an obvious inclusion since it makes all those Attacks deal more damage overall, leading to earlier kills and better punishes.

All that said, MultiVersus matchups have a lot of variety. There are some players that swear by not running any Offense-type Perks, some players that always adjust their entire Perk setup to the enemy team’s characters, and some that never change anything at all. So, let’s go over some of the other Perks Harley mains tend to run in case they’re trying to counter or adapt to the person on the other side of the arena:

Utility: Aerial Acrobat – The increased Aerial Acceleration is useful for approaching other aggressive characters like Finn or Arya. Utility: Triple Jump – Always decent to run, especially if an ally is stacking it. Utility: You Dodge I Dodge We Dodge – A good choice for Harley players that rely on her Jerk-In-The-Boxes or Stuffie Bats a lot. Utility: Tasmanian Trigonometry – Perfect choice when going up against heavy hitters like Iron Giant or Shaggy. Defense: School Me Once – Usually used against heavy projectile characters like Tom and Jerry or Reindog. Offense: Lumpy Space Punch – For a more aggressive playstyle that revolves around Harley’s Aerial Pummeler Offense: Ice To Beat You – Situational, but great for players who use her Stuffie Bats well. Offense: Thats Flameable Doc – Actually works well when stacked with her Confetti, as it just leads to more Ignite triggers overall.