Home Entertainment MTV VMAs 2021 LIVE with BTS and BLACKPINK: When and Where to... 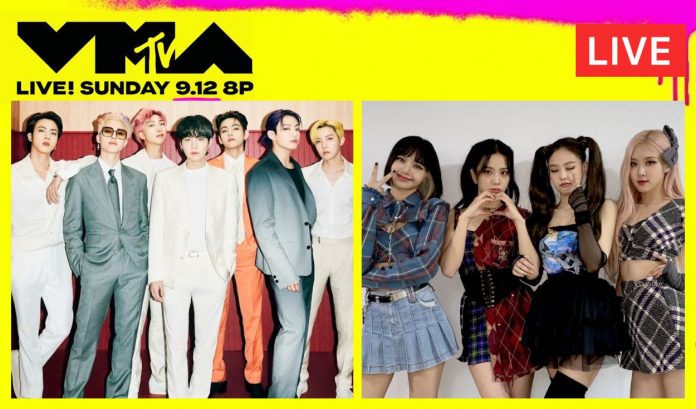 BTS and BLACKPINK seek the glory at the 2021 MTV Video Music Awards. Find out here all the details of the awards: channels, schedules, and more.

After sweeping the Kids’ Choice Awards Mexico 2021, the acclaimed boyband BTS will seek to repeat the feat, but this time at the MTV Video Music Awards 2021 , an important American award where he competes as one of the most nominated acts.

BLACKPINK , the girl band sensation, is also contesting the 2021 VMAs . Following Lisa’s successful solo debut with “LALISA,” BLINK could celebrate a new milestone if her idols are successful.

With the newspaper Somag News, you can find out all the details of the ceremony: when and where it will be held, channels, schedules by countries, which categories the K-pop stars compete and more.

On Sunday night, September 12 (ET), the 2021 MTV VMAs will be held. As is official, it will include a special tribute to the victims of the attack on the Twin Towers, a tragedy whose 20 years are commemorated the day before.

MTV VMAs 2021: what time does the central ceremony begin

The central gala of this American festival for the best of music will begin at 7:00 pm (ET). Half an hour before, its preshow will begin , an event that will reach the public through social networks.

Schedules by countries to see the MTV VMAs 2021

BLINK and ARMY from Latin America and Spain cannot miss the results of their idols in the 2021 VMAs. Here, the start time of the central gala, according to country.

On which channel to watch the MTV VMAs 2021

The preshow and the red carpet of the awards can be seen on social networks, but the central gala will be broadcast only by the MTV channel.

Channels by country to watch the MTV VMAs 2021

Twitch link and stream to see the MTV VMAs 2021

Fans of BTS and BLACKPINK will share links from Twitch and other media to stream through social media, minutes before the main ceremony begins. Mainly, these links will be broadcast on Twitter.

Best K-pop Video at the VMAs

Twenty-one acts make up the standout lineup for the 2021 MTV VMAs , including Olivia Rodrigo, Ed Sheeran and Justin Bieber. Doja Cat will be the host of the event.

BTS is not included in the lineup unlike last year , so their participation is expected to be through pre-recorded thank you videos if they win in their categories.

On the other hand, the presumed presence of BLACKPINK’s Lisa at the 2021 VMAs stirred up the fans. Due to a tweet from the organizing channel, it was spread that the idol could perform at the awards with her newly released single album LALISA.

However, everything seems to indicate that it was a communication error on the part of MTV.

The complete lineup of the MTV VMAs 2021

The host of the MTV VMAs 2021, Doja Cat will undoubtedly be one of the artists in the lineup. Along with the rapper of “Kiss me more” are Alicia Keys, Justin Bieber, Olivia Rodrigo, Camila Cabello, Machine Gun Kelly, Lil Nas X, and more.

Guardians of the Galaxy is one of the most unique Marvel...