Home Entertainment MTGA: Innistrad Scarlet Engagement, A Vampire Wedding To Bring Them All Together 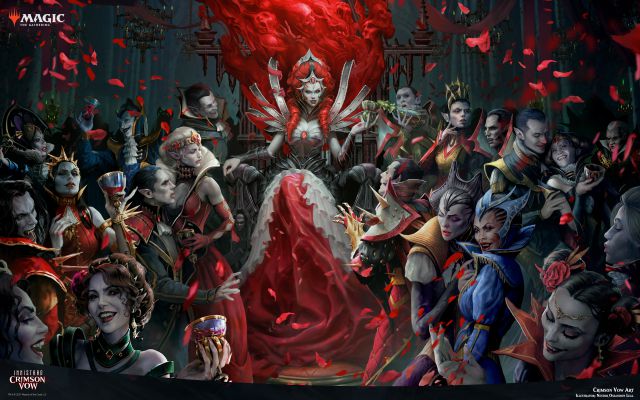 MTGA: We had the opportunity to test it in Magic: The Gathering Arena and we told you all about Innistrad: Scarlet Engagement. Innistrad Scarlet Engagement from Magic: The Gathering is set, like its predecessor, on the plane of Innistrad, a plane in which when the sun sets, all of humanity becomes prey. The night is home to lycanthropes, bloodthirsty vampires, the undead, and other abominations lurk in the dark. Although we are on the same plane, this time we are on the scene of the ostentatious wedding of the two most powerful vampires in Innistrad.

We present to you, on the one hand, the groom, Edgar Markov, his letter is a legendary creature – Noble Vampire on one side and a legendary artifact, Edgar Markov’s Coffin, on the other. The enchanted groom has the ability to add a + 1 / + 1 bonus to the other vampires you control and also when he dies, instead of going to the graveyard, he returns to the battlefield transformed into a legendary artifact. Edgar Markov’s Coffin, at the beginning of his controller upkeep, creates a 1/1 black and white vampire token with the lifebinding ability and a counter is added. Upon reaching 3 or more counters, they are removed and he transforms back into the legendary vampire.

This is a pretty powerful card because it doesn’t die completely, but instead enters a loop of going to the coffin and reviving, and also, even though it is in coffin form, you do not stop having creatures under your control when you create them at the beginning of your maintenance.

And, on the other hand, the undisputed star of this wedding, Olivia Voldaren. According to the story behind the collection, this great wedding has the objective of uniting the great vampiric bloodlines under her command, and seeing the power of her abilities, we are not surprised that they follow her.