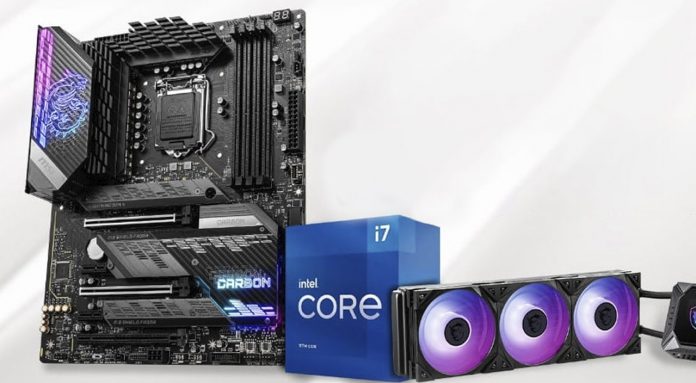 As it is known, the new 11th Generation Intel Core processors were recently announced. While the performance of these new CPUs is evaluated in all circles, we wanted to share our expert opinion with buyers who do not have experience in this field.

Now that you have purchased your 11th generation Intel Core processor, you will also need a new motherboard and a cooler. Two common situations we encounter with these advanced CPUs are their power consumption and their warm-up characteristics.

So how will casual gamers determine the hardware configuration that suits them best? Some advice might be to get the best, but their prices are not cheap at all. What kind of choice should you make? If you intend to broadcast live, edit videos or play online games, you can choose the combination Intel Core i7-11700K + MSI MPG Z590 GAMING CARBON WIFI + MSI MPG CORELIQUID K360.

MPG Z590 GAMING CARBON WIFI is a motherboard capable of meeting the power requirements of the new 11th generation Intel Core processors. With a total of 16 Duet Rail power systems, this motherboard has a strong and durable VRM management. In addition, MSI special Core Boost technology ensures fast and pure current transmission to the CPU.

This motherboard features high speed internet with the latest WIFI 6E and Intel 2.5 LAN connections. So you can share your videos online, or play online games more smoothly. There are also 3 sets of M.2 SSD slots on the motherboard, one of which offers PCI-E 4.0 SSD support.

One of the important components to use the powerful performance of the Intel Core i7-11700K processor and the VRM design of the motherboard perfectly is the CPU cooler. The feature that distinguishes MPG CORELIQUID K360 from other water coolers at this point is its cooling performance. MPG CORELIQUID K360 uses the exclusive MSI TORX FAN 4.0 design, which creates a powerful airflow to achieve rapid cooling on the radiator.

There is also a 60mm TORX FAN 3.0 fan on the water block. The TORX FAN 3.0 designed fan is used to deliver concentrated air flow to both the CPU, M.2 SSD, VRM, and other surrounding components, and to keep temperature values ​​at an optimal level.

On the Cinebench R20, we have seen that the CPU maintains a temperature level of 75 ~ 77 degrees Celsius in different liquid cooler fan modes while operating at 4.6GHz core frequency. CPU temperature was recorded as lowest in Gaming mode and highest in Silent mode. In addition, the Core i7-11700K CPU can go up to 5.0GHz with processor overclocking.

Test results show that the MPG CORELIQUID K360 with TORX FAN 3.0 support in the water block effectively reduces the heat on the VRM and M.2 SSD, significantly increasing both the stability and overclocking performance of the CPU and storage components.

When we look at the test results, we can see that the MPG Z590 GAMING CARBON WIFI motherboard MPG CORELIQUID K360 cooler combination offers high performance with an affordable price advantage both in daily use, live broadcast and gaming. CPU performance can be significantly increased with minimal thermal differences in overclocking.