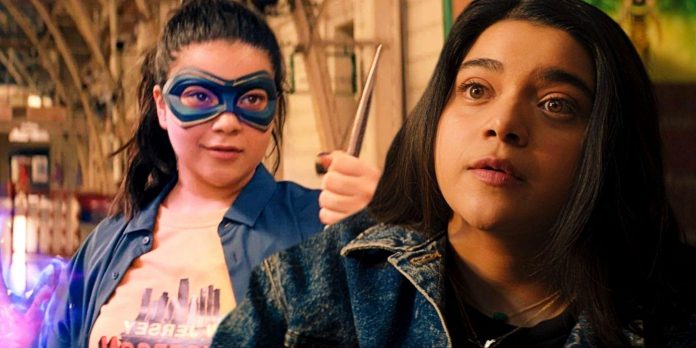 Attention! This article contains spoilers for the fourth episode of Miss Marvel.

The changes made to Kamala Khan’s powers in “Miss Marvel” didn’t affect the series as much as many expected, but the fight scenes in episode 4 demonstrated that the show still has a big problem to overcome. In the comics, Ms. Marvel’s powers are very similar to Mr. Fantastic’s—she can stretch at will, get bigger and smaller, and “embigate” her fists to attack enemies. KVM went the other way, providing the newest hero of the franchise with a bracelet that gives Kamala the ability to summon hard light, which can then be manipulated into objects.

With the release of the show’s trailer, Ms. Marvel’s changing powers became the central theme of the series. Some believed that infidelity from the comics would change the character too much compared to the one that many fell in love with, and in the process spoil the series. However, the first three episodes of “Miss Marvel” proved that these concerns were unnecessary, since the concept of hard light worked with better effect than many expected.

With these first episodes dedicated to how Kamala discovered her abilities and came to terms with them, the capabilities of the hard light concept have not been tested in many combat situations. Kamala’s battle with the genie at the end of episode 3 was the first teaser of what her abilities might look like in action, but this was expanded in episode 4 of Miss Marvel. Bad battle scenes showed the limitations of Kamala’s computer graphics capabilities, mainly showing how they slow down the choreography and subsequently deprive the battle scenes of a sense of energy.

In episode 4, “Miss Marvel”, the “Red Dagger” was introduced and introduced ​​​​Kamala is her first real fight scene as they mistook each other for antagonists. While it was nice to see more of Kamala’s comic abilities, such as punching with enlarged fists and stretching arms, the episode lacked the energy needed to make the combat choreography look believable. This is due to Kamala Khan’s new abilities and their dependence on computer graphics, which means that she needs to stand still for a long time while hard light effects are added during the post-processing stage. It doesn’t seem to have the same effect when Kamala is defending herself — the hard light acts as a shield in these cases — but only in more difficult situations, such as when Kamala’s body has to grow to strike.

While these problems can be solved with a larger budget — giving the filmmakers the opportunity to create a fully computer—generated model of Kamala more regularly – the problem of her great abilities in combat scenes may hint at a future problem for the Fantastic Four MCU. With the same abilities as Reed Richards, it is difficult for Ms. Marvel to create dynamic action sequences, and this means that the studio may face similar problems with Mr. Fantastic in combat. So far, the Disney+ series has managed to solve this problem by paying more attention to the coming-of-age narrative, and Kamala’s abilities have been a side issue; by comparison, the Fantastic Four are unlikely to be able to solve the problem in the same way.

For Ms. Marvel, it seems that the biggest problem of the series is not how he changed Kamala’s abilities, but how he represents these powers in moments of heroism. Episode 4 gave a brief overview of how Kamala might look in action, but perhaps the larger budget of “Miracles” where she will appear next will allow the combat choreography to seem smoother. However Marvel Studios decide to do it, the change in Ms. Marvel’s power needs to be addressed if Kamala is ever going to fight on the side of the Avengers.