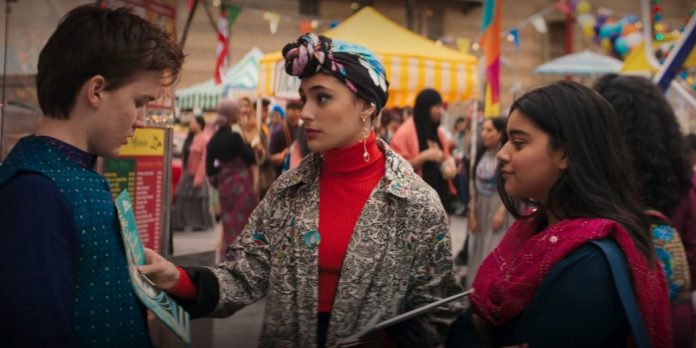 Ms. Marvel has a really difficult mission for the MCU, which far exceeds what you would normally expect from an ordinary teenager, and yet somehow the latest superhero to hit Disney Plus does a good job with its two main tasks. : Introduce a relatively unknown character and break through as Marvel’s first Muslim superhero.

This statement itself sounds quite simple, however, it should serve as a reminder that the MCU does not have the best track record in serving its women, since even all the star power that Scarlett Johansson possessed saw that Black Widow avoided being Disney Plus. first try the double stream and theatrical releases, and then the legal drama. There remains only now the villainous Scarlet Witch, whose fate now hangs in the air, and Kamala Khan’s own idol, Captain Marvel, so how does Miss Marvel sail through these waters while simultaneously exploring Islamic culture?

From the very first episode, the series sought to establish images that would surely appeal to many South Asians or Muslims who grew up with rather conservative parents, especially by modern Western standards. “Miss Marvel” is hardly the first production to attempt this, however, it is trying to do it in a completely different way, as it still needs to become part of a larger MCU.

Miss Marvel is a relatively new creation: the first issue with Kamala’s story arc appeared only in the Captain Marvel comics in 2013, which means that she is as much a by—product of an increasingly diverse America as Hydra can be considered a trophy of the West’s triumph in the world. The Second War, or Red Omega, is a relic of the collapse of the Soviet Union and the fall of the Berlin Wall. However, Kamala represents a new twist, as the 2010s sought to present American Muslim characters in a new light that could erase the cultural consequences of the United States’ war against radical Islamic terrorism, and the series even has a reference to FBI surveillance to make sure viewers don’t forget about it.

American Muslims, whether of Pakistani or any other origin, have lived in the country for decades, and the MCU is the perfect place for pop culture to portray the traditions of these families in a way that is very close. The reason Ms. Marvel is getting attention is because Kamala’s teenage struggles are exactly the same as those of people who grew up in very similar house rules.

Stories about the origin of superheroes are often born because of terrible accidents, natural disasters, fate or some magical moment, and yet the first acquaintance with Kamala’s powers comes when she slips away only to then hear a harsh conversation from her overprotective mother. Most of all, Miss Marvel embodies the conflict of young generations striving to conform to the traditions and expectations of their family, while paving their own way of life, in this case as a new space girl who joined The Marvels.

Switching The Origin of Miss Marvel

One of the biggest changes compared to the Miss Marvel comics compared to her incarnation in the MCU is that Kamala’s abilities have been substantially rewritten, and although at first Kevin Feige attributed this to a simple character adjustment to make her fit better, the rest of the MCU also brought some nice plot advantages. You see, by rejecting the connection with inhumans and the stretchable type of Mr. Fantastic’s abilities, the screenwriters were able to connect Ms. Marvel’s newfound abilities with her cultural background.

Of course, there is still a lot to explain, but the new mysterious character and the mother of the amorous Kamala further pushes the idea that Miss Marvel’s legacy is crucial to determining who she is. The fact that her grandmother’s bracelets are destroying her inner strength is another reward for her Pakistani background and upbringing.

This not only adds an extra layer of complexity to her character, but also justifies the inclusion of cultural elements, such as references to the partition of India, as a result of which her family’s country was created out of nowhere by the British Empire, that is, Miss Marvel. also contains tiny history lessons for the uninitiated. The same goes for several Urdu words used throughout the show, such as “chalo” or “beta”, references to Bollywood superstar Shah Rukh Khan, gossiping Illuminati aunts who symbolize the fear of being judged by elders, Nakia’s attitude to wearing hijab, or the double standards separating men and women in the mosque or at home.

All these are very real experiences for first-generation immigrants, their children and people living in South Asian countries, which, in turn, cause real emotions. Previously, “Shang Chi” and “The Legend of the Ten Rings” did something similar, because the film pays homage not only to Hong Kong cinema, but also to Chinese culture, despite the fact that China does not approve of this, although the format of the film does not quite take into account the kind of exposure that Disney Plus provides to Kamala.

The Xbox Series X/S Quick Resume Feature Will Improve Thanks To...